Well, it finally happened, after attempting to get an Orioles card signed by Wade Miley since he was traded to the Orioles last July, I'm finally able to scratch him off of my need list. And it only took me nine months! 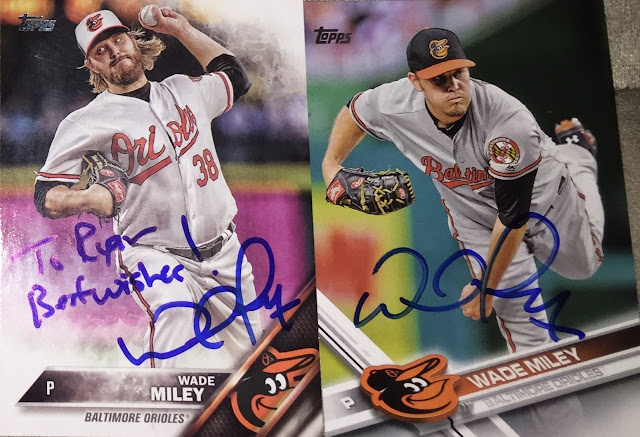 Wade came to the Orioles organization via a trade with the Mariners on July 31, 2016; the O's sent prospect Ariel Miranda to Seattle to complete the deal. Probably within a week of the transaction, my dad had made Wade Miley Orioles Old Man Cards, and I attempted to get them signed a handful of times through the end of the 2016 season. Every time I was at a game, Wade consistently ignored requests from fans to sign. I even had him one on one a couple times and was turned down.

After the 2016 season, Wade was included in the 2016 Topps Update set as an Oriole (the personalized card on the left), and I had to officially include him on my autograph need list. Oh well, I figured that I could knock his autograph out at Fanfest in January. Except he wasn't there, which is really strange considering that almost every US based member of the team attends the yearly event, which I assume is a contractual obligation.

Ok, I thought, well I can hopefully get him at Spring Training. But that didn't work out either. I was waved off a few times by him and I didn't see him sign once over the week that I was in Sarasota. By that point, I was pretty bummed out, as Spring Training is generally the best bet to knock out some of the tougher players, as they generally seem more willing to sign with the smaller crowds and more relaxed environment. One of my other autographing friends who spent the entire of duration of Spring Training attending O's games didn't have any luck with Wade either.

To top things off, I couldn't even find any signed Orioles cards for sale anywhere. Which kind of indicated to me that I wasn't the only person who Wade was not signing for, and my frustrations continued.

Until yesterday. Sunday's have historically been the best day to get pitchers' autographs at Camden Yards as there isn't any batting practice on the field and most of them seem to do long toss or other warm-ups in front of the fans. Wade appeared to be throwing a bullpen session when I got to the came, and as he was walking back to the dugout, some fans called him over.

I didn't have much hope, but he came over and probably signed autographs for 20 minutes. He probably signed for 200 people, and since I wasn't sure if I would have another chance to get his autograph, I asked him to sign two cards and he obliged. He signed my son's ball as well, and honestly seemed very personable and friendly. He was joking around with everyone and seemed to be a pretty nice guy. What a nice turn of events, and I can rest easy knowing that my autograph need list just got a little shorter. Thanks Wade!
No comments:

Welcome to the 2017 Orioles baseball season, starting only four days late here at the Great Orioles Autograph Project; which let's face it, is pretty timely for me these days.

This year's Opening Day roster includes four new faces to the Orioles. (In addition to one that I still am trying to track down from last year, since a Wade Miley Orioles autograph has continued to elude me since he was traded to the O's last August.) The new members to the 2017 Baltimore Orioles 25 man Opening Day roster are C Welington Castillo, OF Seth Smith, OF Craig Gentry, and LHP Vidal Nuno. Three of those guys made their Orioles debuts on Opening Day, and I'm guessing that you can figure out who this post is about by the little clue up there at the top.

Let me just get this out of the way first. Matt Wieters, the former top prospect, my favorite player, and the O's regular catcher for most of the past eight seasons is no longer on the team. That's a tough thing for a fan to deal with, but the writing had been on the wall. I was shocked that he was back in 2016, as he became one of the first ever free agents to accept a qualifying offer from his former team. It was nearly a foregone conclusion that he wouldn't be back after the O's did not extend another offer after the 2016 season.

Unfortunately, he never attained the level of success that the Orioles or their fans had hoped for; I mean this guy was the top prospect in all of baseball at one point and some people were ready to anoint his as a Hall of Famer in waiting before his MLB debut. I admit, I overvalued him early on, but I was not alone. I will miss him being on the Orioles, especially since he's now playing for the somewhat-rival Natinals, but I enjoyed rooting for him for a long time. Now I just need to figure out who my new favorite Oriole will be!

So anyway, no pressure on Welington Castillo from me or anything...he's only replacing the guy who had been my favorite player for about a decade. But realistically, he very well might be an offensive and defensive upgrade over Wieters, and anything that makes the Orioles better is a good thing for all of us. The Orioles signed Castillo to a one year deal with an option on December 16th after the Diamondbacks surprisingly released him. 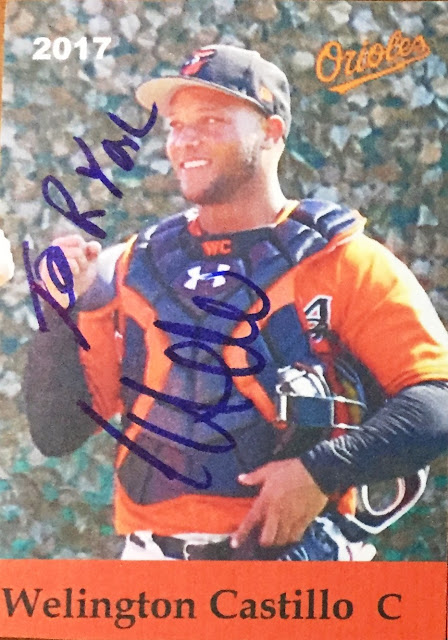 As another year begins, my dad once again came through with his Old Man Cards (OMCs) to help ensure that I can have signed Orioles cards of any possible player for my collection. He really enjoys making them, and I really appreciate his help. In addition to making this card, he actually got it signed for me too, since Welington was with the Dominican World Baseball Classic team for the duration of my time in Sarasota this year. It must be nice to be semi-retired and be able to spend a month down there, hopefully I can live that life in another 30 years! But I won't complain about a short (mostly yearly) trip to balmy Florida!

Welington has played in both of the Orioles games so far, and is 3-7 at the plate and has looked solid behind it as well. He seems to have really meshed with the pitching staff, especially considering that he spent a large chunk of Spring Training away from the O's pitchers.

One interesting item that I came across while researching this post is that in 2015 Welington had been  traded from the Mariners to the D'Backs for two other current Orioles, Mark Trumbo and Vidal Nuno. And now they all play in Baltimore together. Baseball is funny like that sometimes.
3 comments: