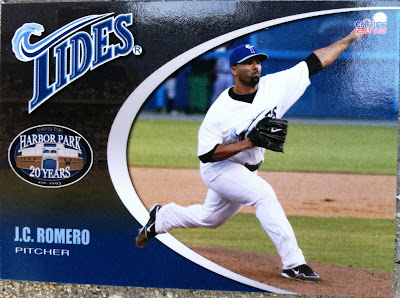 J.C. Romero, the Oriole new lefty bullpen specialist, made his orange and black debut in last night's 7-1 win against the Red Sox. He worked a scoreless eighth inning, giving up one hit, and became the 938th player to appear in a game for the O's. I don't currently have an autograph of J.C., but he was included in the 2012 Norfolk Tides team set, so I hope to have him sign that card for my collection in the near future.

J.C. has pitched in the Major Leagues since 1999 with seven different franchises, most notably the Twins and Phillies, and over those 14 seasons, he has appeared in 676 games, almost exclusively as a reliever. He was a major key to the Phillies' 2008 World Series Championship victory, even earning the win in the decisive game five to secure the series win. However, that following off-season, he was suspended for 50 games for testing positive for a performance enhancing drug, which he claimed was due to a tainted supplement.

Over the past two seasons, J.C. has bounced around between the majors & minors for seven different clubs, and the story of how he came to the Orioles is rather interesting.

Prior to the 2012 season, the Cardinals signed him to a one year contract but released him in mid-May. The Orioles quickly signed him to a minor league contract and assigned him to the AAA Norfolk Tides, and Romero had an opt-out date of July 10th if he hadn't been called up to Baltimore by that time. Well, that day came and Baltimore's bullpen was doing just fine, so the Orioles let him get away. The Indians proceeded to sign him to a deal and assigned him to their AAA club, but it was to some sort of conditional deal that allowed the Orioles to get him back if they needed him for the big league club. And that time came on Monday, when Troy Patton, the only lefty reliever the O's had used all season, injured his ankle and had to head to the D.L. So the Orioles got Romero back from the Indians, albeit in return for one of Kalina's favorite minor leaguers, Carlos Rojas.

So, it's nice to have Romero as a, possibly short-term, part of the bullpen, but it's unfortunate that it cost the Orioles a player, even if clubs consider Carlos to be an organizational type of player.