I was able to get autographs from all of these players (except KOJI!) but they didn't seem to sign often. 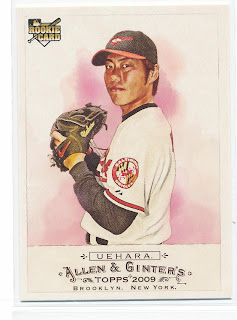 I have to start by addressing Koji, the second Orioles player that I did not obtain an autograph from this season. This is the card I would like to get signed if I ever get the opportunity. Also, a quick check of eBay reveals multiple Orioles certified autographs available for sale at reasonable prices. I prefer getting things signed in person, but if it doesn't work, at least I have some options.

I saw Koji sign at about two games but he drew quite a crowd, specifically from his Asian fans, so I didn't get him to sign anything for me either time. He also got injured early in the season and didn't pitch after June 23, so that also made his auto tougher to get in person. I know he was signing TTM through the season so I tried that route, but no success there yet. 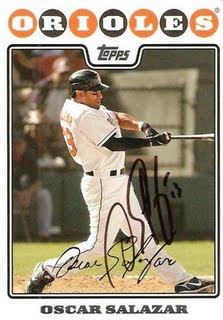 Oscar signed this card for me at the Tides game I went to this season. I also sent him a TTM request while he was at Norfolk, but that seems to be gone for good. He was with the Orioles from June 7-July 12 this season and I don't recall seeing him sign while in Baltimore. But since he signed for me in Norfolk, I can't say I've never seen him sign for the fans.

JJ signed for me twice this season. Both times were early in the year before he was promoted to being the O's closer. I don't think that I saw him sign at all after he was named the closer so it could have something to do with a superstition of his or possibly he got an inflated sense of himself once he was the closer. Who knows? Not I. 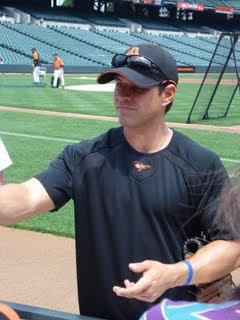 This picture is from the one time this season that I saw B-Rob sign. I somehow neglected to scan the card that I got signed that day but trust me, I did get one autographed. I will scan it tonight if I get a chance. 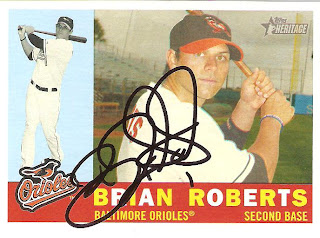 B-Rob definitely falls into the category of being one of the most popular Orioles players so hundreds of people want his autograph at every game. He's a great player and definitely the focus of many female fans' attention so that leads to added competition when seeking his signature. That said, I think I only saw him sign openly like this one or two other times out of all the games that I attended. 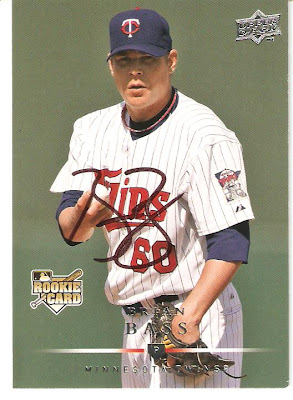 I got Brian's auto twice this season. He signed this card for me in Toronto while he was walking back to the dugout after stretching and also signed an Allen & Ginter card for me at the last game of the season. I hope to also scan and add that to this post tonight. It looks really good, and is replacing this card as my favorite Bass auto. 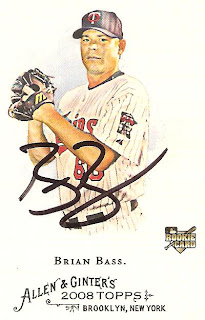 Even though you can't see the borders it looks pretty nice

Those were the only two times that I can recall seeing him sign all season long. I think some of that has to do with the whole relief pitchers staying in the dugout and then walking out to the bullpen together thing. As a reminder for next season, if you are trying to get relievers' autographs, you should focus on Sunday games.

Re: "...possibly [Jim Johnson] got an inflated sense of himself once he was the closer."

At the KC game, Roberts and Koji signed for a few people, but not a lot.

I'm glad that you were able to get the Bass A&G signed!