I've decided to showcase some of my baseball/autograph pictures that didn't get posted over the course of the season until I have some new baseball action to get excited about. And I'm not thrilled about this World Series. I want the Yankees to lose but it would be hard to say that I would be pumped about back-to-back Phillies wins. I grew up around Phillies phans and I don't need all that noise. 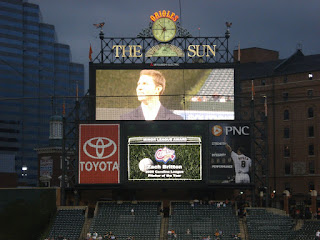 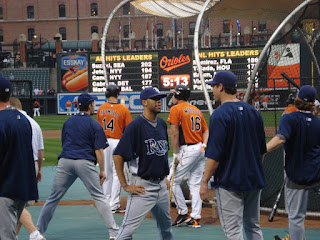 This picture features David Price, the Rays' star prospect, front and center. He had actually just signed my card, a card that may one day actually be scanned and shown on the blog. Nolan Reimold and Chad Moeller are standing by the cage in the background and you might also notice the back of former Orioles catcher Greg Zaun's head on the right hand side of the picture. I don't recall who Price is talking to, but it could be Pat Burrell. I know it's #6, any Rays fans out there know this one? I'm looking at you Troll... 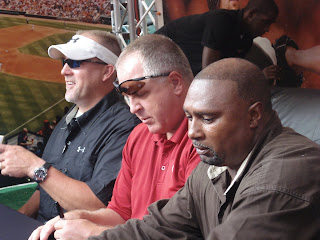 This was taken at one of the last Orioles Alumni Autographs nights of the season. From L to R, that is Chris Hoiles, Joe Orsulak and Ken Dixon. I already had autos of all of them but it's always cool to see Hoiles around the Yard. Kalina is always excited to see him too.

Hey, I was at that game!

Yeah you were. Let me know next time you're in the area.

It's not #6, it's #5...and it is Pat Burrell. Although there's a large wad under his lower lip that makes him hard to recognize...

Good call Sliwi! It was that lip full of chaw that threw me off.