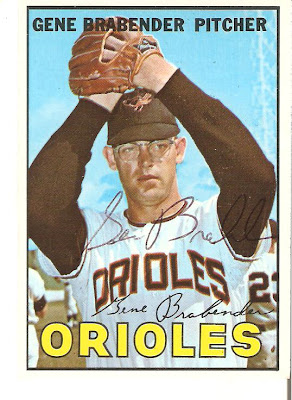 Today, I decided to feature the former Oriole who has, in my opinion, the best (most comical) name of anyone to have worn the Orioles uniform. I know it's childish, but the name Brabender makes me laugh, or at the very least smirk. So you can picture me grinning until the end of the post.

Gene "Lurch" Brabender was certainly an imposing figure to opposing batters. The 6'6'' Brabender earned his very appropriate nickname while he was a member of the expansion Seattle Pilots. He was supposedly referred to as "Animal" during his time with the O's. I tend to think if Gene played today someone would have given him a nickname that played off of his name, something like "B cup". Haha, but I digress.

Brabender pitched in the Majors from 1966-1970 and had his greatest success during his time with the Orioles from 1966-68. He went 16-14 with a 3.39 ERA in 82 games over those three seasons and was a member of the '66 World Series Championship team although he didn't appear in a game during the series.

He was originally drafted by the Dodgers but the O's snagged him in the 1965 Rule V draft after seeing him pitch at the nearby Aberdeen Proving Grounds during his time in the military. It's like the O's used the military team as a type of farm team precursor to the current Aberdeen Ironbirds. For those of you not familiar with Maryland, Aberdeen is about 45 minutes northeast from Baltimore.

Gene had his own construction business after his time in baseball was over and died from a brain aneurysm in 1996 at the young age of 55. RIP Gene. Thanks for standing strong with your awesome surname.