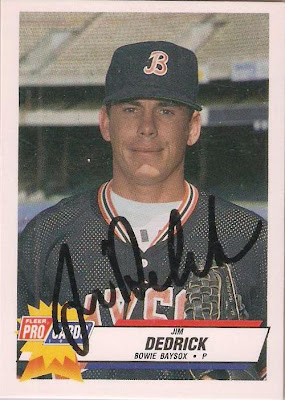 Jim had a long career in professional baseball and played from 1990-2003 for many different teams and organizations. However, his time in the Majors was very short, lasting about a month and half with the 1995 Orioles. He made it into six games, pitched 7.2 innings, gave up two earned runs including one homer, walked six, and struck out three. He didn't earn a decision, and finished his MLB career with a 2.35 ERA.

Jim kept plugging away to get back to the show and made it to the AAA level with four other organizations, but could never quite make it back to the Big Leagues. He worked/s as a scout for the Diamondbacks after he finally hung up his spikes following the 2003 season.