The Anniversary of an Awful Trade

Exactly twenty years ago today, the Orioles made what is widely thought to be the worst trade in their 57 year history. 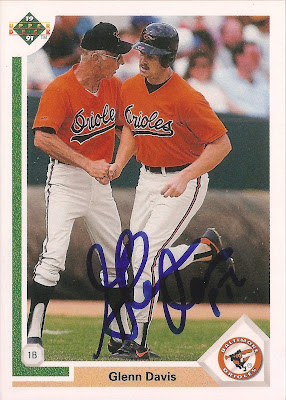 They acquired an unknowingly past-his-prime Glenn Davis from Houston for three young players who you might have heard of...
( I really like this card. Cal Sr. is on it. It looks like Glenn hit one of his few homers for the O's. And they are both wearing that wonderful shade of orange.) 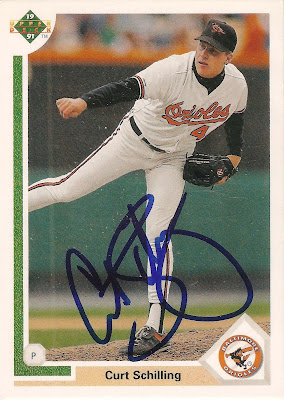 Six-time All-Star, three-time World Series Champ, three-time Cy Young runner-up, occasional blowhard, and likely HOF inductee, Curt Schilling. Yes he started his career as an Oriole over parts of three seasons from 1988-90. His attitude might have been hard to handle at times, but you can't argue with his stats. The guy led his league in almost every pitching category at some point over his career. 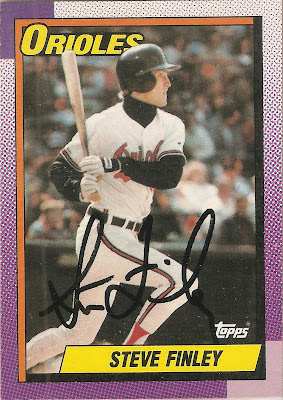 Yep, Steve Finley began his 19 season MLB career in Birdland too. He spent 1989-90 in Baltimore before being sent packing. He would only win five Gold Gloves, make two All-Star teams, and win one World Series Championship on his way to playing the fourth most games in centerfield in the baseball history. Like that wouldn't have been nice to have in Baltimore. 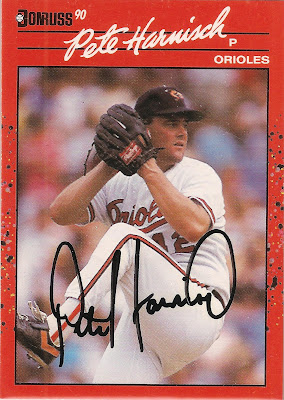 Last and, I guess also, least, the O's included Pete Harnisch in the trade, who went on to have a 14 season career, but never found the ridiculous amount of success that Schilling and Finley did. He made the 1991 All-Star team but struggled to remain on the field during the late '90s.

It's not as if all three of these guys would have played their entire careers in Baltimore (oh if they had...) but the Orioles essentially got parts of three disappointing seasons from Davis for a trio of young players who all went on to find varied degrees of success in the Majors. Without the trade, the Orioles undoubtedly would have been a better team in the early to mid '90s. And Davis played his last game in Baltimore on May 23, 1993 after getting his jaw broken in a bar fight.

I'm glad that the current O's front office hasn't made any boneheadded trades like this one and held onto the young talent. Now if guys like Zach Britton, Chris Tillman, and Adam Jones can find the kind of success that Schilling, Finley, and Harnisch had, the O's might actually get out of the cellar this year.

Wow, that is a bad trade - it might just beat the Nolan Ryan & other guys for Jim Fregosi deal that is often regarded as the worst trade in Mets history.

BTW, I got the box of cards you sent today. Thank you very much! I'll have to see what I can find to send to you in appreciation.

Wow. I don't remember that, but you're right, it sucked.

Nice to see you got all of their auto's.

You're very welcome Paul. I hope that there were some new things for you in there.

DB- It was just awful.

Thanks again, Ryan. There were quite a few oddballs & inserts I'd never seen before.

That's as bad as when the Sox traded Ruth to the Yankees!!