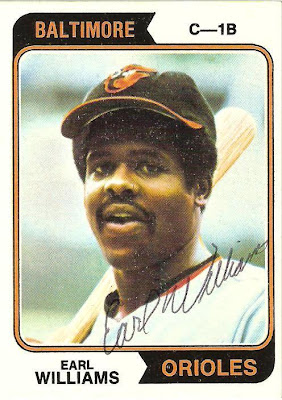 I'm off work today and I'm guessing that some of you are, too, so I'll keep this short. I think that it's important to remember the work of Civil Rights leaders like Martin Luther King, Jr., who fought to make and keep our country equal for all people, regardless of race. Without his continued work and determination, along with players like Jackie Robinson and Larry Doby who broke baseball's color barrier, a guy like Earl Williams might never have had the chance to play in the Major Leagues. I can't imagine splitting up players and segregating the league just because of the color of the players' skin.

Earl was the 1971 National League Rookie of the Year while with the Braves. If the Majors hadn't been integrated, an inferior white player would have won that award, and that doesn't seem right to me. It bothers me that all-time greats like Josh Gibson and Cool Papa Bell never had the chance to play professionally against the white players of their day. But you obviously can't go back in time to change anything; I'm just glad that today's players are only judged based on their talent level.

Email ThisBlogThis!Share to TwitterShare to FacebookShare to Pinterest
Labels: Earl Williams, Rookie of the Year