My Favorite Autograph of 2011


Pedro Viola, who has appeared in a grand total of six games for the Orioles over the past two seasons, provided me with my favorite autograph obtained in 2011.

He spent the majority of the season with the AA Bowie Baysox, who play only about 20 miles from my house, so I made it to about 10 of their games this season. Pedro wasn't always the most accessible signer, but when he started signing, he would typically do so for everyone who wanted his signature.

And that's when this happened... 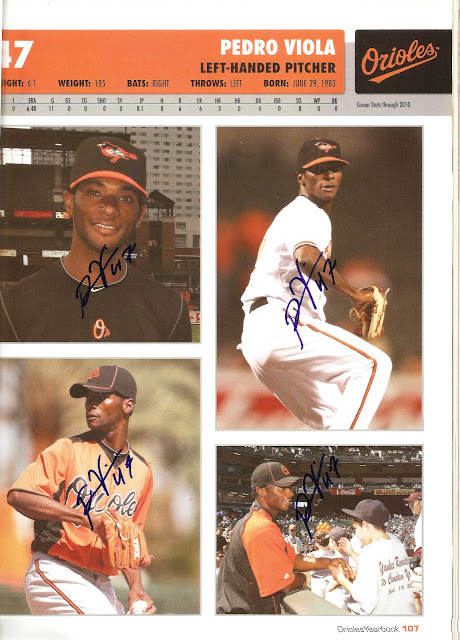 You see, Pedro speaks very little English, so there is a communication barrier with him at times. I like to think that I can speak Spanish, but realistically I can throw a few nouns into a sentence, and have problems with my verb usage. So I probably come off sounding like a little kid who is still working on how to use full sentences.

I asked Pedro to sign his yearbook page, and he obviously obliged. I'm not sure if he asked me where to sign and I said anywhere (or maybe everywhere), but it's certainly a uniquely signed item. I almost started to pull it away after the first signature, but he just kept going. 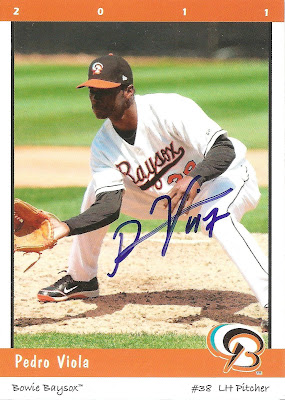 He was also kind enough to sign his 2011 Baysox card, which will likely be his only cardboard issue in the Orioles organization, so it's heading for my collection as well.

Thank you Pedro for the great memories, and signatures too!

That's so funny. You're terrible Spanish got you a great signed pieced.

It's very important to know a bit of Spanish nowadays, especially if your an MLB auto seeker.

DB- I guess it kind of worked out this time! And I totally agree. The players seem to appreciate it too, even if you're not great at it.