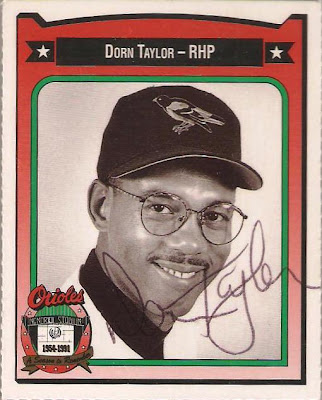 Dorn pitched in 27 games over parts of three seasons in the Majors. He appeared in 23 games with the Pirates in 1987 & '89 and pitched in four games for the Orioles in 1990. On June 25, 1990, the Pirates traded the O's for Jay Tibbs for a player to be named later (PTBNL). On September 5, they sent Dorn and an additional PTBNL to the O's to complete the trade. After pitching for the O's, Dorn seems to have hung up his spikes. I guess he figured that 245 Minor League games with only 27 MLB appearances was enough.

This is, I guess somewhat obviously, his only Orioles card; he also appeared in the '87 Fleer Update set as a Pirate and was included in a number of Minor League sets over the years. I recently bought this card and was excited to find it as there isn't much supply of or demand for Dorn Taylor Orioles autographs.

*sigh* yet another Crown card you have that I don't!! I'm jealous!

If I ever come across non-Crown cards of some of these guys, I'll definitely send some Crowns your way.