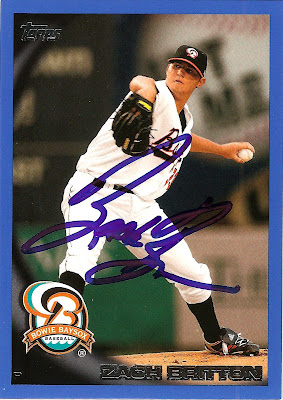 Zach Britton got the W in his Major League debut today, allowing one earned run and striking out six over six innings against the defending AL East champion Rays. It was an encouraging debut from the O's best top level prospect. Really the only bad part of his debut was that he was called up due to Brian Matusz's injury. But hey, that's not his fault and he stepped in to keep the O's dream of the perfect season alive. 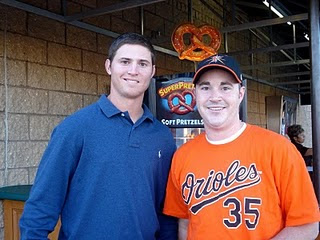 Zach signed the card at the top for me at O's Spring Training this year. He's always been very fan friendly, and even posed for this picture with me during his time with the Carolina League Frederick Keys in 2009. Check out the post I wrote that originally showed this picture back on 1/1/10. It's pretty accurate 16 months later. 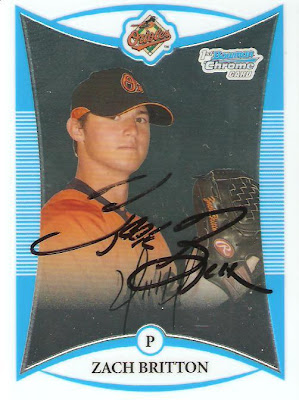 This autograph will take a spot in my collection since it pictures him wearing an O's uni (an orange one to boot), but he's signed a number of cards for me during his time in the Orioles' farm system. Let's just hope that Zach's success continues for years to come. And that the O's continue playing like a playoff caliber team.

It's nice to see the O's getting off to a good start this year - I hope they can keep it up.

I'd love to see the A.L. East big spenders get humbled a little bit this year.

Congrats to Zach. Here's to a long and successful career.

DB- Thanks, I hope the same.