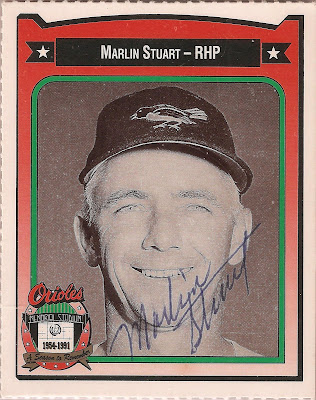 Marlin has one of the most interesting first names that I've come across in my Orioles autograph quest. I've certainly never known anyone named Marlin, and while I have heard the name before, it's baseball connotation now-a-days obviously brings to mind the baseball team in South Florida.

Even more interesting, to me at least, is that his nickname was "Mott". I would like to hear how or why he was named Marlin and/or nicknamed Mott. I wasn't able to track it down in my online research, all I discovered is that Marlin is now more of a feminine name but seems to be rather uncommon for women as well.

Marlin might have had a longer big league career but proudly served his country for three years in World War II. He still pitched in the Majors from 1949-54 chiefly with the Tigers from '49-'52 and the Browns/Orioles from '52-54. He wrapped up his MLB career with the Yankees in 1954 and had a 23-17 record and 4.65 ERA. Interestingly, in a 1954 Sporting News poll asking hitters who they thought were the toughest pitchers to hit, Ted Williams supposedly named Stuart.

After his playing career ended, Marlin returned to his hometown of Paragould, Arkansas and spent time farming and later working as a heavy equipment operator. In 1980, he sadly suffered an aneurysm followed by a stroke and lost the ability to walk or speak. He passed away in 1994. RIP Marlin.

Since this Orioles Crown set was issued in 1991 and Marlin passed away only a few years later, I was very happy to finally track down a signed copy of this card as it's Marlin's only O's card.