TTMs, the Week of Insanity Continues...

Are you getting bored with these TTM successes? I hope not since I have to get through a few more today and tomorrow...and then I will move onto something else. Today I am focusing on some of the more recent players that have signed for me. 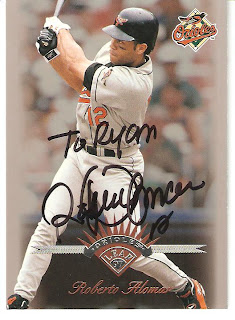 Alomar is definitely the best TTM success I have had so far who doesn't charge to sign. You can get all kinds of HOFers and stars to sign but they pretty much all expect something in return, so I was pleasantly surprised to find out that Robby signs.
He is regarded as one of the best all-around 2nd basemen of all time and has myriad awards and accomplishments to back up that claim. Some of them include: 12 straight All-Star teams, 10 Gold Gloves (an MLB record for a 2B), 4 Silver Sluggers (2nd most all-time for a 2B), 2 World Series Championships, and 2,724 hits (51st on the all-time list). He will likely make it into the HOF next year.

Unfortunately, Robby's time in Baltimore was marred by a nasty incident with umpire John Hirschbeck. He was ejected from a game for arguing a called third strike when Hirschbeck either used a racial slur or called him a fa#@ot. Alomar responded to that by spitting in Hirschbeck's face. Ugly stuff man, people were mad at Robby after that.

He was with the Orioles the last time they were relevant and helped the team make it to back-to-back ALCS's in 1996 & 97. Honestly, I could have the meanest 25 jerks ever put together on a roster right now and still be fine with it if we won a World Series. I am that desperate at this point.


Alberto Castillo 2007
OK, this gets a little confusing so stick with me. This is not the Alberto Castillo currently on the Orioles. The current Alberto is a pitcher who was born in Cuba, I did a post about him a while back.

This Alberto Castillo is the catcher who backed up Ramon Hernandez between April 3-June 21 of the 2007 season. I can't say I remember him very well, so don't really expect anyone else to either. He appeared in only11 games and batted .161 so it's easy to forget about a guy like that.

He has kicked around the Majors since 1995 and although he hasn't played in the Bigs since his time with the Birds in '07, he signed from the Newark Bears' address and was still trying to make it back to the Show as of earlier this season. Alberto has played with 8 teams over 12 Major League seasons, but only appeared in 418 games; still that's not too bad. I couldn't even make it past Little League!

I never would have thought to write to Alomar, so congratulations on your success.

I'd also like to point out that you managed to get one more Alberto Castillo autograph than I did this season. :)

So Alberto wasn't much of a signer at the Park? He seems to be a pretty good signer TTM. Richie Hebner, who managed the Frederick Keys this season, was also easier to get TTM than in person.

I wish I had an extra Castillo to send to you.

I think I remember Castillo from some time he did with the Royals. Man, it must be late in another bad season when I refer to former players "doing time".

Nice job with Robbie. He was a good TTMer when he was playing, at least earlier in his career when I wrote to him.