The Saga of Mark Huismann

So let me start by saying that Mark is an 89% TTM signer which is awesome. It's great that he takes some of his time to sign autographs for his fans and doesn't charge a dime for it. So many former players aren't nearly as accommodating as he is, and I have to give him props for it. That being said, I've sent him two TTM requests over the past year and included his Orioles Crown card in both. It's his only Orioles card, so I really would like a signed copy of it for my collection. I wrote about what happened with my first request last April. If you don't feel like clicking on the link, Mark returned an 87 Topps Mariners card instead of my Crown card.

Well, last Thursday I got another card back from Mark. Take a look. 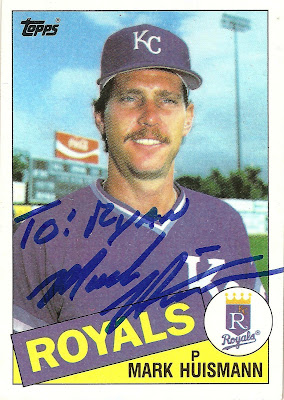 He personalized my card this time around, but that's definitely not my Crown card and he's certainly not wearing an O's uniform. At this point, I don't know what to think. There are some guys out there like Hank Foiles who won't sign the Crown card because technically it's an unlicensed set and I guess the players didn't receive any money for it. Hank is the only player that I have heard this about, and I feel like it must be due to some specific grudge, but it's possible that other players feel the same way and won't sign their Crown card. Unfortunately for me, the Crown card is the only Orioles issue for some short-time O's like Mark. (He spent 8 games with the O's in 1989.)
Well, a few weeks back, I found something on ebay that made me feel a little bit better. 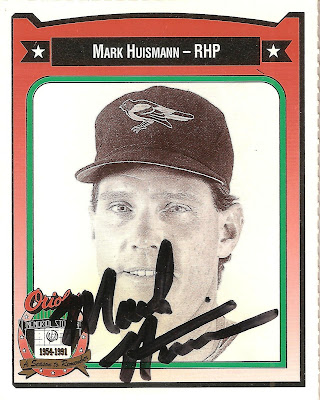 But it also confirmed that Mark has signed the Crown card at some point. There's also a possibility that he takes all of the cards from the TTM requests he receives, puts them in a pile, then signs them and randomly puts them back into envelopes. So if you have a signed Huismann Crown card personalized to Ryan, I'm interested in trading with you!
And doesn't Mark look almost entirely different on the two cards? If you put the pictures side-by-side and quickly asked me if it was the same person, I would probably say no.

He played on 7 teams!

This could go on a long time

Hmm...maybe I'll send out my Crown to him and see what happens. I do have a fresh book of stamps to use.

CC- It really could; it seems like a games of checkers that I'm losing.

Billy- Good luck and let me know what happens!

I feel bad, I got my Crown card back from him.. I just double checked for you, no personalization to Ryan. Sorry.

Damn Kirk, that makes it worse in every way. So I now know that he currently will sign Crown cards, but just hasn't signed mine (twice). At the very least he could have personalized your card to me so we could work our a trade...