As I wrote yesterday, over the next few days I will be showing cards that seem to show pictures that were taken at Spring Training. 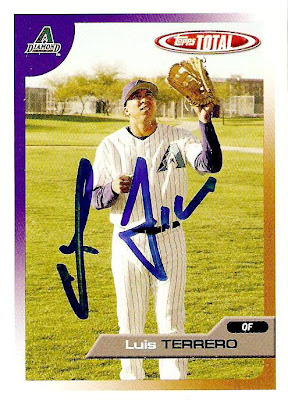 I particularly like Luis Terrero's "pretend you are about to catch a flyball" pose. I'm guessing that this picture was taken wherever the D'backs used to hold Spring Training, which appears to be a grassy area in the middle of an industrial park.
Luis spent the 2006 & '08 seasons in the Orioles system and played in 27 games for the Birds during the '06 season. 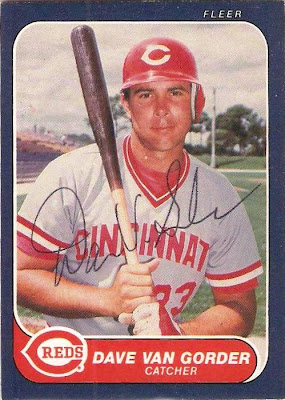 Next up is Dave Van Gorder and his classic "down on one knee, bat on shoulder" pose. I can't be sure that this picture was taken during Spring Training since those trees in the background don't appear to be of the palm variety, but it's at least from a minor league facility. Although the combination of the background and the Reds jersey makes me think of ST.
Dave spent the 1987 season, his last in professional baseball, in the Orioles system, appearing in 12 games for the O's and spending the rest of the season at AAA Rochester. He was included in the Orioles Crown set, which is his only O's card, but Dave has twice resisted my TTM attempts. Don't worry, I will keep trying. 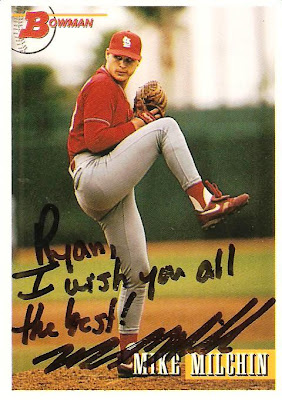 Mike Milchin was nice enough to sign my TTM request and included about the longest inscription I've ever received. Very cool of him.
The picture on this card definitely makes me think of a Spring Training bullpen session on a back field. There doesn't appear to be anyone else on the field, but I'm guessing that Mike was at least throwing to a catcher. And I'm quite sure those are the stems of palm trees leading up to unseen leaves in the background.
Interestingly, all of Mike's major card issues show him in a Cardinals uniform, but he never appeared in the Majors for them. His only big league action came with the Twins & Orioles in 1996.
As far as I can tell, Mike became an agent after his playing days were over and represents many current Big Leaguers, including the O's new first baseman, Derrek Lee.

Dick Allen Hall of Fame blog is doing cards that never were of short-timers. Do you have any pictures of Ken Holtzman in an Orioles uni? I have never seen one.

Johngy-
Ken was featured in an O's uniform, or hat at least, on his Crown card. I just sent you a picture to the email account listed in your profile.