Well that A's series was a bit of a letdown. After the O's won the first game, they just couldn't in another game to put that silly record of losing the season series to the A's every year since 1998 to bed. And ending the series with a runner being thrown out at home was just salt in the wound. Maybe next year, I guess. 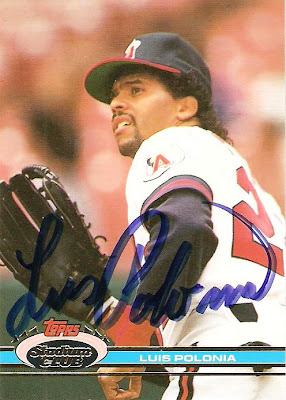 Next up, the O's travel to Southern California to take on the Angels. Representing the Angels today is former Oriole and (California) Angel, Luis Polonia.

Luis played in the Majors for six teams over twelve seasons between 1987-2000, and won two World Series Championships during his career; one with Atlanta in 1995 and the other with the Yankees in 2000. He spent almost four full seasons with the Angels from 1990-1993, but his time as an Oriole was significantly shorter, lasting only 58 games during the middle of the 1996 season. He didn't have much success in Baltimore and the only stat that Luis ever led his league in was caught stealing (in three consecutive seasons from 1991-93). He even earned the unflattering nickname of "Catch 22"; the reasoning being that if you hit him 100 fly balls in the outfield, he would catch only 22 of them.

Here's to hoping that the Orioles can right the ship over the last six weeks of the seasons to at least (once again) narrowly avoid that nasty 100 loss mark. No better time to start than now! A sweep would be angelic!