(Every Friday, I profile a former Oriole who has passed away. I've substituted the word unpossible for impossible as an homage to a line from "The Simpsons". Young Ralph Wiggum, who is a few pennies short of a dollar, says "Me fail English? That's unpossible.")

My dad gave me a Christmas present a little early this year; he has been one of the very few people who have regularly gifted me baseball cards over the years and I always look forward to what he has for me. I was blown away when I opened my gift and it contained three of the four remaining Orioles autographs that I needed for my collection. My need list is down to only 1! I have to spread these bad boys out since I've been searching for them for so long, and I will feature one each week over the next three weeks to savor their awesomeness. 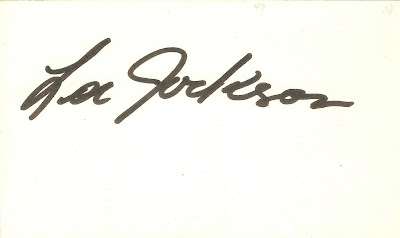 Up first is Lou Jackson since this is only the second example of his autograph I've ever seen and the first I've seen in person. I also think that his signature is the most rare of the trio. The previous autograph of Lou's that I had seen was a signed 1959 Topps Cubs card on ebay that the seller wanted $1000 for, which is significantly out of my price range. If it was his 1964 Topps Orioles card (the only Orioles card of his that was released during his lifetime) I might have considered taking out a second mortgage, but not for the Cubs card.

Lou played in only 34 MLB games over three seasons. 30 of those appearances came with the Cubs in 1958-59, and the other four came for the Orioles in 1964. Lou bounced around the minors after his time in Chicago and he came to Baltimore after the O's selected him from the Milwaukee Braves in the 1963 Rule 5 draft. Following Spring Training, he broke camp with the O's but wasn't able to regularly crack the lineup, so was sent to the AAA Rochester Red Wings in mid-May, spending the ensuing season and a half with them. After the 1965 season ended, Lou signed a deal to play professionally in the Japan for the Sankei Atoms (now the Tokyo Yakult Swallows) and spent the 1966-68 seasons there. He developed some serious health problems while in Japan, possibly due to his alcohol abuse, and died in Tokyo in May 1969 of pancreatitis. He was only 33 years old when he passed away.

Obviously, Lou's passing away at such a young age in a foreign country over forty years ago is the main reason his autograph is so hard to track down. Adding to that issue is that he was only featured on the two cards I mentioned above during his lifetime. He was posthumously featured as an Oriole in this TCMA set and the Orioles Crown set, but he quite obviously, never signed either of them.

Thank you dad for this amazing autograph to add to my collection.

Not wanting to disappoint you, but on looking at this ' signed ' index card it appears to have been done with a Sharpie which was not availble before the death of Lou Jackson in 1969 ...

Could you advise what pen you believe this index card was signed with and where it came from as it, outwardly, does not appear to be genuine ...

However, the signature does resemble all we have seen for Lou Jackson who was a popular player when playing with us on the old Toronto Maple Leafs Baseball Club in the International League in the 1960s.

Clay- please shoot me an email at salsmanado at email dot com, I'd like to discuss this with you.

This was purchased from a reliable seller I've dealt with in the past so I believe it to be legit but you bring up an interesting point.

Merry Christmas, Ryan... I hope that your autograph turns out to be the one you need for your collection.

Here is wording from our email but we cannot send the image until hearing from you again ... Thanks.

Here is an example of a nicely signed photograph of LOU JACKSON, from 1963, taken in Syracuse by noted photographer and autograph authenticator JEFFREY W. MOREY who produces 6 issues per year of a magazine called THE AUTOGRAPH REVIEW, something you might like to subscribe to, which is now in its 34th year of production ...

Firstly, with respect to the LOU, the letter ' u ' is not complete ...

Then with JACKSON, you will note the J loops and drops but ' a ' in the photo picks up from the J ...

Hope this variation will prove useful to you ...

We are not saying that this particular index card is not genuine, only that it appears a bit different in some areas ...

The Sharpie pen as we know it today was not available in 1969 as Sanford was still using chisel point markers so this would be impossible to use to sign anything properly as it would then be choppy and might turn into more of a calligraphy look if the chisel went flat at any point on the card ...

Do let us know what you find out in checking around and we shall try to locate some other variations ...

Will check your wants to see if we have anything you are looking for as have been obtaining signatures for more than 55 years ...

All the very best with your great Orioles collection which looks to be very detailed and in depth ...


The message is ready to be sent with the following file or link attachments: