Vern Bickford Joins the Collection, Only Four To Go

Before last week, I needed five former Orioles' autographs to complete my collection. I had the luck to pick up this signed Vern Bickford image and since he wasn't pictured on any Orioles cards during his lifetime, he is now completely knocked off of my list. 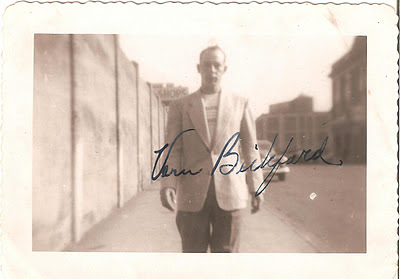 Vern pitched seven seasons in the Major Leagues from 1948-54, mainly for the Boston/Milwaukee Braves. He threw his first big league pitch at the age of 27, and likely would've reached baseball's top level sooner if not for his three years of military service during World War 2. Vern's first four seasons in the Majors were very good but he broke a finger on his pitching hand during the '51 campaign and it never fully recovered. He pitched in a single game for the inaugural 1954 Orioles before a pinched nerve and the subsequent surgery effectively ended his career.

His career highlights include throwing a no-hitter in 1950, making the 1949 National League All-Star team, and leading the N.L. in complete games, innings pitched, and batters faced, also in 1950.

Vern sold cars, worked as a carpenter, and as a traveling salesman after his baseball career ended. He passed away in 1960 from stomach cancer at only 39 years old. He was the third earliest former Oriole to die, following only Howie Fox in 1955, and Tom Gastall in 1956.

Vern was featured on a number of cards that were issued during his lifetime, but is pictured as a member of the Braves on all of them. The only card to show him as an Oriole was the O's Crown set that came out 31 years after his passing, so, obviously, no signed copies of that card exist. His autograph is hard to track down on anything , mainly since he's been dead for over fifty years, so I was very happy to add this signed photo to my collection. I am interested in finding out about what town this was taken in, or what those shops are in the background, but I guess it's pretty unlikely that I will ever figure that out.

Nice addition. It is kind of an odd addition. But, if it gets you closer to you goal, go with it

Best of luck with the final four.

Congratulations on getting one step closer.

Z- I agree, it's very strange, but any autographs of his are hard to find so I couldn't be picky.

Paul- Thanks, I'm in the home stretch now.

I had to figure you had won this auction but I had doubts when you didn't post this sooner!

Yep, I lucked out. Had been outbid on another Bickford in the past, so pulled out all the stops for this weird autograph.