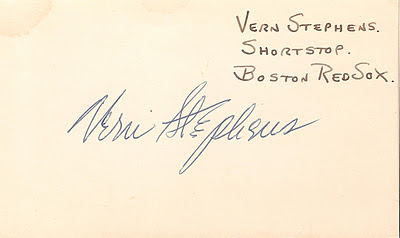 Vern Stephens is likely one of the most accomplished former Orioles that you might not know much about. He played between 1941-55 for the St. Louis Browns, Red Sox, Orioles, and White Sox and is one of the best hitting shortstops of all-time. Between 1942-51 while playing with the Browns and Red Sox, Stephens was a seven time All-Star and placed in the top ten for MVP ballots six times. He led the American League in RBI three times (in 1944, 49-50) and home runs once (in 1945). You can argue that the competition might have been somewhat diminished during some of those years because of the number of players who fought in World War II but it wasn't Vern's fault that a knee injury kept him from passing his army physical.

While Vern's greatest success came in St. Louis and Boston, he spent a season plus in Baltimore towards the end of his career and was one of the original 1954 Orioles. Interestingly, he was the only Orioles player who had also been a member of the 1944 Browns, who made the only World Series appearance by that team during their time in St. Louis.

After his baseball career ended, Vern became a very successful amateur golfer. He passed away from a heart attack in 1968 at only 48 years old.

Vern still holds the record for most RBI in a season by a shortstop with the 159 he knocked in during the 1949 season. His leading the league three times in RBI at the SS position also matches Honus Wagner for the most in baseball history. He was included on the Veteran's Committee HOF ballot in 2008 that was comprised of only players who debuted prior to 1943, but he received less than 25% of the votes, so it's unlikely he will ever be enshrined in the Hall of Fame, but it still gives you an idea about how highly he is regarded still today.

Vern was featured as an Oriole on only one card that was issued during his life time, this 1954 Topps card (this image is borrowed from COMC.com). I have seen a signed copy of this for sale online but it went for much more than I was willing to pay. I hope to find another for sale sometime in the future, but for now, my signed index card will stay in my collection.