Troy came to the Orioles in the December 2007 Miguel Tejada trade with the Astros. He made his Major League debut with the 'Stros at the end of the 2007 season, and made 3 appearances, including two starts, earning the loss in both games he started. He is still seeking his first Major League victory, but has a respectable 3.55 ERA in his 12.2 big league innings pitched.


He missed the entire 2008 season while recovering from a torn left labrum and made his O's Minor League debut at the beginning of 2009 with the AA Bowie Baysox. He thoroughly dominated his Eastern League opponents and had a 6-2 record with a minuscule 1.99 ERA in 11 starts. I had to pleasure to see one or two of those starts and Troy definitely deserved his promotion to the AAA Tides. Unfortunately, things didn't go as well for him in the International League. His stats with Norfolk weren't pretty; he had a 1-3 recordwith a 6.45 ERA in 9 starts but from what I hear, at least some of that had to do with fatigue since he hadn't pitched a full season in two years. 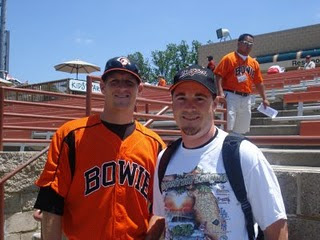 Troy seemed like a very nice guy on the occasions that I saw him at Bowie and I spoke with him at length once towards the end of his time with the Baysox. I really like him and hope that he can find success again early in 2010, most likely with the Tides. I don't think he has a very good chance to crack the Orioles out of Spring Training, but I do hope to see him pitch for the Orioles soon.

Oh, and if you saw the mention of a contest in the title of the post and made it all the way down here, I don't want to let you down. I will be starting the first contest on the blog here soon. The details will be pretty simple and all I have to say at this point is that it will have something to do with Spring Training. I hope that you're excited, because I think it will be fun.

I would agree that Patton is a pretty nice guy. Most of them seem to be at this stage, especially in the public eye, but Patton just seems more like he will continue to be.

I like the Bowman card...although the autographs don't seem that similar. Guess he had to take his time for the certified one ;)

Sliwi- thanks! I'm glad that someone is excited about the contest.

Patton does seem genuinely nice, and I really do hope he makes the O's soon.

And I agree about the autograph, I always like to look at those things but sometimes forget to write about it. Good looking out!

I agree about Troy. He was very cool and nice, at FanFest during the off-season. He was really going out of his way to talk with fans, and take some pictures. I hope he does find his success at the MLB level!

Eddie-it's always nice to come across talented players who still are down to earth. And it's even better when they stay grounded as Major Leaguers.