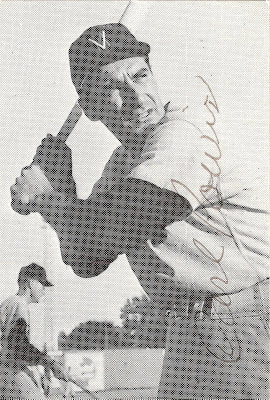 Carl Powis's MLB career lasted all of 15 games at the beginning of the 1957 season. He had a solid Spring Training and broke camp with the O's, but had only 8 hits in 41 regular season at-bats before he was permanently sent back to the Minors. From what I've read about him, Carl's playing skills never quite kept up with his confidence level.

He had been one of the few former Orioles who I did not have an autograph of until recently when I found this oddball gem on ebay. The card is a mini, really more like a picture than a gum card and I scanned the back to show it off. 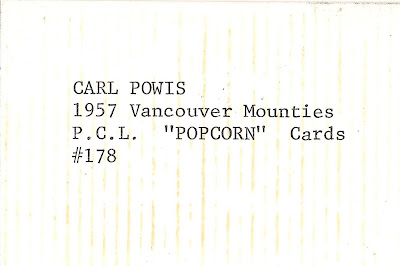 Supposedly, this is a P.C.L. (Pacific Coast League) Popcorn card, and shows Carl during his time with the Vancouver Mounties, an Orioles minor league affiliate at the time. Has anyone ever seen one of these Popcorn cards before?

Carl was also featured in the Orioles Crown set, so I might be able to upgrade to a signed copy of that one day, but I will probably keep this in the collection too since it's so unique.

That would be a neat old card even if it weren't signed.

Thanks Paul, I totally agree.

Carl Powis was my Grandfather. I have his jacket from when he played for the Orioles.

Rachel- That's very cool! Any chance that you have some signed Orioles Crown cards of his?

Rachel please contact me about your Grandfather Carl. At Kathy.m.Wenger@gmail.com