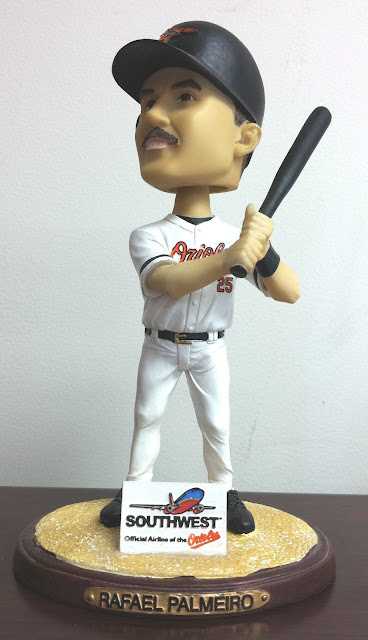 Fellow autograph blogger, Zach, requested that I write a more in-depth post about Rafael Palmeiro after I essentially wrote a blurb about him in a Case of the Sundays post a few weeks back. (My Case of the Sundays posts are normally about players, cards or autographs that I don't particularly like.) The O's gave away this bobblehead of Raffy back in July of 2004; I've avoided sharing/writing about it because I no longer like him and the bobble sits in the back row of my Orioles bobbles. 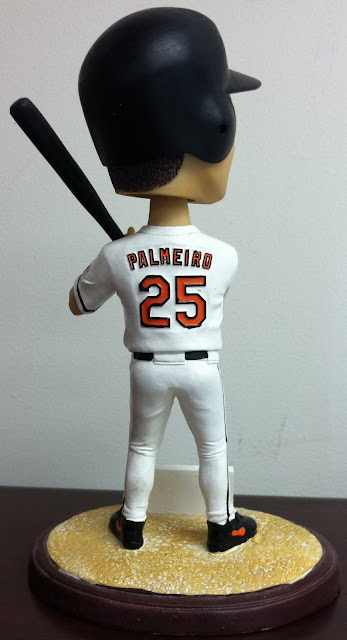 I assume that most of you are familiar with Raffy's extraordinary career and spectacular fall from glory. It's hard for me to relive those memories, so if you want to read the whole story about his fall from grace, you can read about it here. For a quick recap, the Orioles were playing pretty well in 2005 and had a chance to finish the year with a .500 record for the first time in eight seasons. Near the middle of July, Raffy recorded his 3000th hit and the Orioles planned a "Rafael Palmeiro Day"  in mid-August at Camden Yards to celebrate the accomplishment. But then the news came on August 1st that Raffy had tested positive for a steroid, one of the more serious ones too. The man who had pointed his finger at members of Congress earlier that year, swearing under oath that "Let me start by telling you this: I have never used steroids, period. I don't know how to say it any more clearly than that. Never." had lied and was suspended for 10 days. And the celebration for him was cancelled. 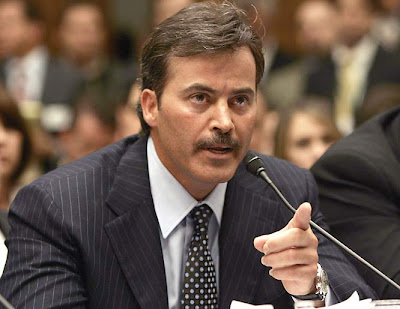 To make matters worse, it came out that Palmeiro blamed the positive tests on some tainted B-12 shots that Miguel Tejada had given him, thus implicating an Oriole teammate and making the organization look bad. The team collapsed under the pressure of the situation and finished 14 games under .500. Palmeiro faded away and didn't even play a game in the month of September.

A man who was once considered a sure-fire first ballot Hall of Famer, one of the four members of the 500 HR, 3000 hit club, became a baseball pariah within a mere month. Although, he has maintained that he never took steroids, most of the evidence points to the contrary. In his first year of HOF eligibility, he received only 11 percent of the votes; 75 is needed for induction, so it seems unlikely that he will be voted in anytime soon.

Although Raffy probably would have gone into the Hall wearing a Rangers hat since he played more seasons there and had slightly better numbers in Texas, I used to think of him as one of my favorite Orioles. He was consistently great and it really tore me up when all of this happened. Today, I have 0 respect for him and don't like to think about him. This will likely be the last post I ever do on the guy who I once considered one of my top five favorite O's. Boo to you Raffy.

Something still seems strange about the whole Palmeiro steroids scenario. I don't know what it is, but maybe someday it will all come out.

I will be more than happy to take the Palmeiro bobblehead off of your hands.

Hard for me to trade any O's stuff, but I can come up with something. Let me know.

Let me know if you want to trade it.

NO- totally agree, maybe we will find out one day.

Guys- I'm gonna hold on to this bobble since it's an Orioles SGA. But he will remain in my back row.

Thanks Zach, I tried but it's hard to be positive when writing about him!