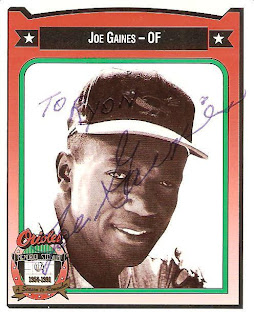 Joe was traded by the Reds to the Orioles for Dick Luebke and minor leaguer Williard Oplinger on December 15, 1962 and was a fourth oufielder for his one and a half seasons in Baltimore. He played all three outfield positions but spent most of his time in left. He appeared in 82 games and hit .263 over his time in the orange and black. On June 15, 1964, the Orioles traded him to the Colt .45's for Johnny Weekly, who never appeared in a game for the O's and was returned to the Colt .45's a few weeks later. So it seems that the O's traded Gaines to Houston for nothing. I guess that some money must have changed hands for this to make sense.

Overall, Joe played in 362 Major League games over seven seasons for three different teams. It looks like he spent most of his career as a backup outfielder but it's still cool that he made it to the Bigs.