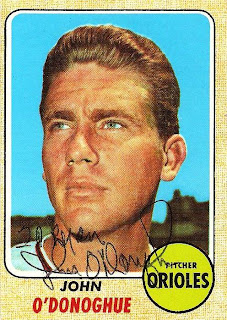 The first John O'Donoghue to pitch for the Orioles (his son, also John, pitched for the O's in 1993) spent only one season in Baltimore. He was traded to the Orioles from the Indians on 11/28/67 for Eddie Fisher and two Minor Leaguers and was sent to the Seattle Pilots with Tom Fisher and a Minor Leaguer on 4/30/69 for Mike Ferraro and Gerry Schoen, neither of whom ever played in a single game for the O's. It's funny how two different, unrelated guys named Fisher were involved on either side of the trades of John. Strange, silly coincidence I guess. It also seems as though Fisher was a more common surname back then. 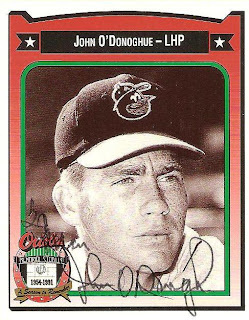 John pitched in relief in 16 games for the O's in 1968; saving two games and holding two others, but he accumulated a 6.14 ERA, the highest of any year during his career, so it wasn't a great season for him.

Over his career, he pitched for six different teams over nine seasons in the Bigs and amassed a 39-55 record with a 4.07 ERA. He made the '65 All-Star team while with the KC A's even though he ended up losing 18 games that year.

He signed these cards TTM for me in just one week, so that was very cool of him.