A Wake Up Call From the Rooster 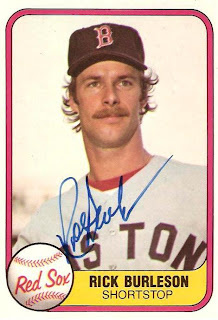 Rick played for the Orioles in the last season of his professional career and appeared in 62 games over the '87 season for the Birds. 55 of those games he played second base and the other 7 he was the DH. His time with the O's was not remarkable but earlier in his career he was a very highly regarded player.

Between 1974-80 while with the Red Sox, Rick was one of the premier shortstop's in baseball. He came in fourth in the '74 ROY race, received MVP votes after four seasons, was voted onto the All-Star team three times and won a Gold Glove. Now that's a pretty sweet run.

He injured his arm sometime around 1981 after being traded to the Angels and was never the same player after that. But he did have some very good years and is in the record books for helping to turn a record setting 147 double plays in 1980.

After his playing days were over, Rick spent a few years as a Major League base coach and then managed for a number of Minor League teams between 1997-2007. He is currently the batting coach of the Reno Aces, which is interesting because another former Oriole, Mike Parrott is the pitching coach for the Aces. Mike signed a TTM request for me earlier this summer.