It's not too often that I get requests to feature a certain player in a post, but when I do, I try to feature them as soon as possible. I received an email from fellow O's blogger, Ryan of '"O" No!!! Another Orioles Blog saying that he apparently has become a big fan of Gus Triandos after reading and learning about his career. He mentioned that he saw that I have Triandos's autograph but had never posted it. Well Ryan, I'll remedy that for you today!

As a disclaimer, I will say that I probably don't know as much about Gus as some other people out there, but I'll do what I can. 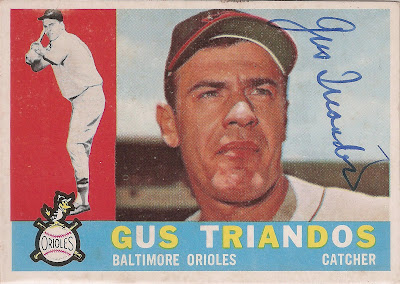 Gus played in the Majors from 1953-65, spending eight of his thirteen seasons ('55-62) with the Orioles and is best remembered for his time in Baltimore. He is regarded as the Orioles first power hitter and hit 142 round-trippers during his time in Birdland, highlighted by the 30 he smashed in 1958.
Gus was a three-time All-Star, in consecutive seasons from 1957-59. He caught Hoyt Wilhelm's no-hitter in 1958 and later caught Jim Bunning's 1964 perfect game while with the Phillies, thus becoming the first catcher to be behind the plate for a no-hitter in both leagues.
He was also a great base-stealing deterrent throughout his career and threw out 66.7% of base-runners in 1957, the third highest percent all-time. His 46.62% career percentage of base-runners caught is good for sixth-best all-time. And I'd be remiss not to mention that he also holds the record for most games played (1,206) without ever having been caught stealing himself and he ended his career with a perfect stolen base percentage. Of course he only stole one base over his 13 seasons, but still, he has the record!
Gus was honored by having a local street named for him, one of only three Orioles, along with Brooks & Cal, to have that tribute. You can find Triandos Drive in Timonium, MD if you're ever in the area.
Well Ryan, I hope that I did a decent job in saluting Gus for you. If anyone else would like to see a former Oriole featured that I haven't already covered, just leave a comment and I will do what I can!