Not My Favorite Player but a HOFer Nonetheless

I will start with a disclaimer that I have never been a fan of Reggie. He always seemed to be too full of himself for my taste. I was just getting in to baseball as Reggie's career was winding down but, since he played for the Yankees, there is plenty of video evidence of him for me to form my opinion. I have also read a bit about him and it certainly sounds like he did not play the game the way that I feel like it should be played. Yes, he was an amazing, HOF caliber talent, but he also liked to remind people of that fact entirely too often.

That being said, Mr. October spent only the '76 season in Baltimore. This was between his years in Oakland and his time with the Yankees. He had a good season at the plate, leading the league in slugging and OPS and finished 16th in MVP voting. One of his seven Sports Illustrated covers features him in an Orioles uniform looking happy enough. 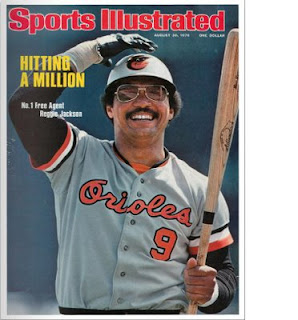 Picture taken from another blog

I know that there are some reasons that Reggie only spent one season in Baltimore. I'm not positive what they are, but I would guess that he didn't get along with the management or some other players. I have no idea why I would go out on a limb with that guess. Maybe because conflict followed Reggie throughout his career.

Even though I'm not a fan of his, I needed his autograph for my collection. There aren't many cards of Reggie in an Orioles uniform, so this 1988 Score card recapping his one season with the Birds is perfect. However, the back of this card only touches on his time with the O's, spending most of its' 5 or so paragraphs talking about Reggie's time with the Yankees. Gee, thanks Score.

It also helps that he is wearing the awesome orange uni in the picture on the card. I found it on the bay for a decent price and jumped at the opportunity. I think that Reggie was the last member of the HOF that I still needed for my O's collection.

If any readers have a reason that I shouldn't dislike Mr. October, please leave a comment and we can discuss from there.

I can't think of a reason... Hell, I forgot that he even played for the Orioles... Glad you found a bargain on the card, I hate plunking down serious money for a player you don't like just to finish a set or collection...

Judging by the SI cover, I would guess he left Birdland for more money.

Likie him or not, that is a cool addition to the project.

Bacon- I agree with that. I hate spending a lot on a players that I don't like but sometimes have to work on the project.

zman-I guess players were being motivated by money even 35 years ago. I read a few places that he didn't fit in to the O's clubhouse for some reason, likely his attitude.

I certainly don't dissagree with you. I am just pleased that you have managed to finish off your collection.

Good job getting Reggie, I'm sure that was not easy!