Before heading south to watch the Orioles in Sarasota, I caught a Pirates-Twins game in Bradenton. McKechnie Field is one of my favorite Spring Training sites and is a very cool little ballpark. I highly suggest you check it out if you are ever heading to Florida in the Spring, or any other time for that matter. They just added lights to the park and were able to lure a Minor League team, the Bradenton Marauders, who start playing there at the beginning of April.

Leave it to an Orioles blogger to lead you to believe you will see Pirates and/or Twins autographs and then start it out with some signed Orioles cards.

Joe has been the Pirates' pitching coach since the beginning of the 2009 season. I tried to get him to sign at a Pirates Spring Training game last season and I'm pretty sure he ignored me and I know he didn't sign for anyone. But this year, he was talking to another fan right near the fence so I held out my card, and he seemed slightly surprised that I had a card of his, but he quickly signed it. Suh-weet.

Burres is in the Pirates' camp as an invitee and is trying to make the team. Brian Bass is also in the same position with the Bucs. That's a lot of B.B.'s who used to play for the O's. Ha! Now if only they were throwing BB's instead of beach balls! Now, I don't want to be too mean and I'm glad that Burres signed for me, but I don't have a lot of fond memories from his years in Birdland.

Andrew McCutchen didn't play in the game that I saw, which was disappointing, but since he didn't play, in his own words "he had nothing else to do" other than sign for us fans, so that was good. He was nice enough to also sign a ball for me.

He is one of my favorite, current non-Orioles players and I'm seriously thinking about collecting his cards. The Pirates are my National League team after all. And he seems like a decent guy.

Dmitri "Da Meat Hook" Young was in the stands at the game to watch his little bro, Delmon, play for the Twins. I normally don't like to bother guys off the field, but he was just standing along the walkway, so I got him to sign my game ticket and also got a picture with him. He seemed like a nice guy and is actually smiling in the picture. 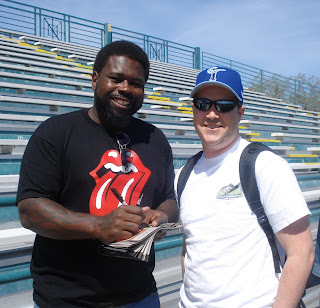 Not too bad. That is pretty cool that McCutchen signed liked that and that you got DaMeat Hook as well.

Nice. I'm impressed by McCutchen's attitude towards the fans.

Thanks guys, I was impressed by McCutchen too. He seems like a cool guy and someone that I would be happy to root for.