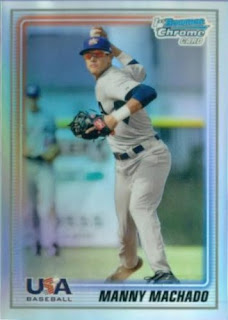 With the third overall pick in the 2010 MLB Amateur Draft the Orioles selected shortstop Manny Machado from Brito Miami Private School. He projects to become a third baseman down the road and has earned many comparisons to his favorite player, Alex Rodriguez. I'm cool if those are only related to A-Rod's play on the field, but I would really prefer that his attitude, demeanor and choice in women be totally the opposite of A-Roid. Also, I don't yet own any Manny Machado cards. These images are "borrowed" from ebay. 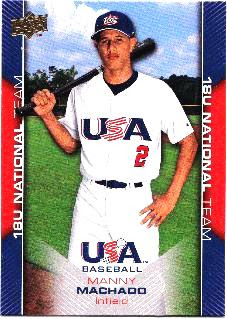 I don't know if any of you watched the MLB Network's coverage of the draft last night, but I was forced to deal with Peter Gammons unintentionally calling Matt Wieters "retarded" in the opening segment. After getting over the shock of the harsh words about the O's franchise cornerstone, I knew that the Orioles only had one pick over the first & supplemental rounds, so most of my excitement was over within the first 15 minutes of the draft. It would be nice if teams could trade drafts picks to inject some additional intrigue into the process. Wouldn't it be cool if teams could either trade draft picks for different picks or current players? Now that would make the draft much more watchable.

Since I don't own any Machado cards, let alone an autograph, here is a signature from a former Oriole player also named Manny. I'm hoping that Machado has more success than Alexander ever did, but I will take the longevity. Manny A is still playing professional baseball, albeit in Italy, at the age of 39. Not too shabby considering he debuted for the O's in 1992.

I'm glad we picked Machado over Taillon. Scouts were saying there could be some injury risk with him.

Also, I received the package today. Thanks again!