Today is one of my favorite holidays of the year. It doesn't involve a whole lot except sharing some Irish food, green beer and/or car bombs with friends. Very low stress, high fun kind of day. I know some people even take off of work to "celebrate" all day, but I will just have some fun later on. That's enough for me these days.

To observe St. Patty's Day, I decided to show off the greenest cards in my Orioles autograph collection. I know that many cards feature pictures that feature plenty of grass on the field but my focus was the color of the card design. There have been plenty of green colored sets over the years and these are my best representatives. 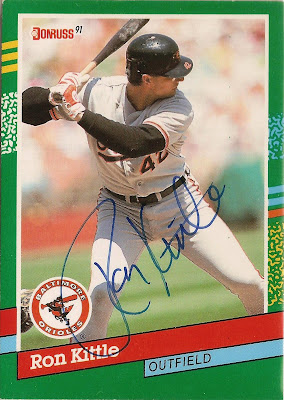 This '91 Donruss Ron Kittle card is probably the closest color to what I think of as Irish green, it's a little too dark but it's close.

In his rookie year with the White Sox in 1983, Ron won the A.L. Rookie of the Year award and also made the All-Star team. In 1990, he played in 22 games with the O's near the end of his time in the Majors. Ron currently makes some awesome benches out of baseballs, bats & bases. If you have an extra $2500, it might be a nice addition to your house. 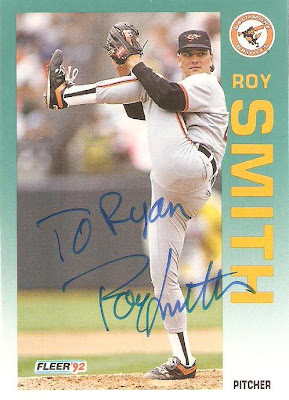 This '92 Fleer set is a nice green at the top of the card before fading to white at the bottom. Overall not a great looking set, but a decent green representative. 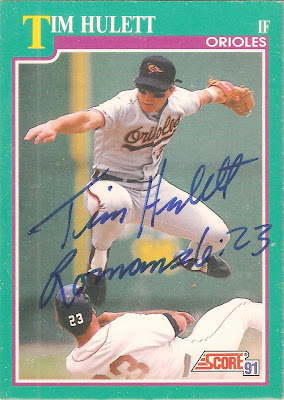 I waffled about including this '91 Score card. It's green and all, but definitely more teal than an Irish green. But screw it, it's a party type of day, not a day for decisions, so here it is.

Tim played for the White Sox, Orioles, and Cardinals over his 12 MLB seasons. He was the O's utility IF from 1989-94 and appeared mainly 3B and 2B.

He has been the manager of the Rangers' Lo-A affiliate, the Spokane (Washington) Indians for the past five seasons and guided them to the 2008 Northwest League championship. He somehow also coaches High School baseball in Louisiana and has led Evangel Christian Academy to state titles in 2006 & 2009.

Tim's son, Tug, has played in the Majors with the Mariners and Royals over the past few seasons.


Have a great day everyone and enjoy a green beer for me. Erin Go Bragh!