Spring Training Contest Update- The Braves are in the Lead

Well, we're just over a week into Spring Training action and, as of this morning, the Braves have the best record at 7-2 which should make Captain Canuck happy. The 6-2 Royals and Twins are trailing them closely, while the 8-3 Giants, 6-3 Rangers & Reds, and 4-2 Orioles aren't far behind.

The 1-7 Tampa Bay Rays remain at the back of the pack and I can say with a fair amount of confidence that they will not have the best Spring Training record in consecutive seasons. That's just too many games to make up in a just over three weeks.

To celebrate the Braves lead, I wanted to show off an autograph of an Orioles player on a Braves card and this was the closest thing I could find. 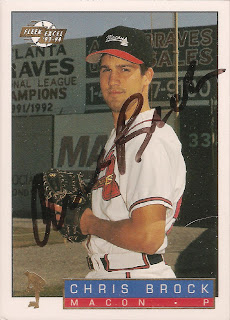 It seems like the most newsworthy thing that he did during his career was during his time with the Phillies when he complained to GM Ed Wade about HOF broadcaster Harry Kalas's habit of riding in the back of the team charter with the players. He was apparently the only one who had an issue with this as Kalas was at the back of the plane entertaining everyone a few days later. Not a good way to endear yourself to the other players or the organization.

Brock is pictured as an Oriole on a 2002 UD 40 Man card but is not a good TTM signer and doesn't appear to do any signings. The card pictured above is the only autograph of his that I've been able to track down, so it's in the collection for now.

I'm crossing my fingers, but the Braves had the best record last year too.... until the final week.

We'll just have to wait and see. I know the anticipation is killing everyone!