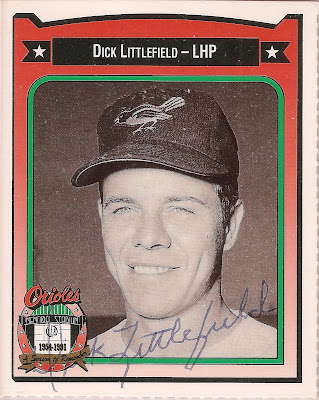 A couple months ago, I came across an ebay seller who had a number of hard to find Crown cards for sale at very reasonable prices. He was apparently a former Orioles autograph collector who had intended to pass his collection down to his grandkids but none of them were interested. Their indifference definitely benefited me and my collection as I've been able to add about 12 hard to find Crown autographs thanks to the seller's willingness to work with me on prices and keeping me updated as to when he was posting cards that I needed.

I'll be showing the cards I bought from him over the next few weeks, and will start today with Dick Littlefield.

Dick was a journeyman in the truest sense of the word. He played for nine franchises in ten cities over his nine seasons in the Majors. I hope that he was either a renter or a real estate genius because he didn't get a chance to spend much time in any of the cities that he played in. The most steady employment Dick ever had was the parts of three seasons he spent with the spent with the Pirates from near the start of the '54 season until early on in 1956.

He also spent one full season and parts of two other with the Browns (and later Orioles) franchise from 1952-54; thus making him a member of the 1954 inaugural O's squad.

Dick's claim to fame is that he was supposed to have been traded by the New York Giants to the Brooklyn Dodgers in 1956 for Jackie Robinson, but Jackie refused the assignment and retired instead.

He passed away in his hometown of Detroit in 1997. RIP Dick.

That is too bad the grandkids were not interested. It looks like they are truly missing out. But, like you said, at least you are benefitting from it.

I know it, I would be so excited if one of my relatives offered me a bunch of Orioles autographs. Kids these days!