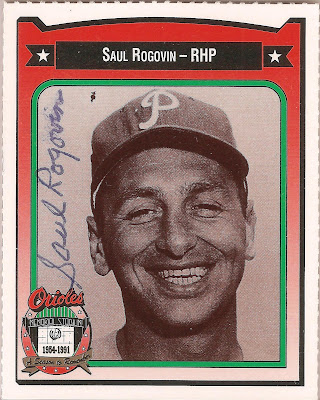 While doing my research for this post, I came across some stories about Saul's wacky antics and personality.  It sure sounds like he was a classic baseball character. One quote from Saul stuck out to me; near the end of his career, he said about the speed of his pitches, "Somebody cracked that I now throw with three speeds – slow, slower, and stop." He would also commonly fall asleep in the dugout during games and could still be found sleeping on the bench long after the game ended. Some fellow players called him lazy because of that, but it's since been theorized that he had some sort of sleep disorder.

Saul pitched for the Tigers, White Sox, Orioles & Phillies during his eight seasons in the Majors from 1949-57. He lead the American League with a 2.78 ERA in 1951 while splitting the season with the Tigers & White Sox.

In 1955, he pitched in 14 games, including 12 starts, for the O's. He was 1-8 with a 4.56 ERA before being released in early July. That was the extent of his time in Baltimore, so I can see why his Crown card couldn't find a picture of him in an Orioles cap.

After he retired from baseball, he went back to school and got his teaching certificate and then taught at a high school in New York City.