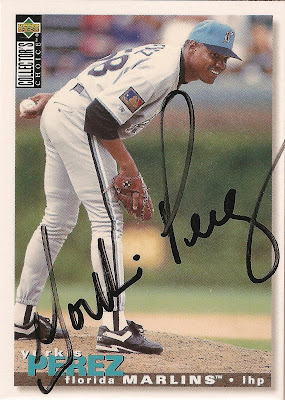 I'm having trouble coming up with something to write about today. So here's Yorkis Perez.

I got this card signed, at I think it  a Pirates game, when Yorkis was pitching for the Marlins in the mid '90s. He later pitched in 23 games for the O's during the '02 season, but never had an Orioles card produced, so this has stayed in my collection over the years.

Yorkis is a cousin of the three pitching Perez hermanos, Melido, Pascual & Carlos, so I guess that some Major League pitching talent runs in that family's blood.

About the only other thing I have to say is that he signs his Y in a unique and cool way. Although it looks like his first name spells Youk, which I don't like.