The Giants currently own the best Spring Training record with a 14-5 mark in Cactus League action. It's pretty surprising for the defending World Series Champs to be leading the way in Spring Training too. So much for a lull.

Here's the two signed "Giants" cards I have in my Orioles autograph collection. 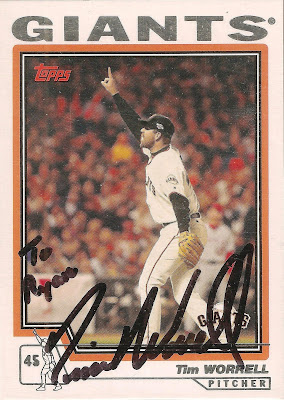 Tim pitched 14 seasons in the Majors, most notably for the Padres and Giants. His Orioles career lasted all of five games early in the 2000 season and he went 2-2 with a 7.36 ERA before the O's released him on May 1st.

Since he was only with the O's for a month, he never had any Orioles cards produced but I think this Giants card is pretty cool. I really like how the crowd provides the backdrop and how Tim is either pointing to a pop-up or celebrating a victory. He was nice enough to sign my TTM request in only five days in September 2009. 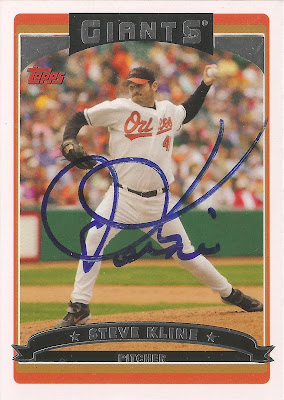 Steve managed to criticize both the Orioles fans and his teammates before the regular season even started in his only season in Baltimore in 2005. He's one of my least favorite recent Orioles, which is an accomplishment for a relief pitcher who was 2-4 during his only season pitching for the O's. Great work Steve.