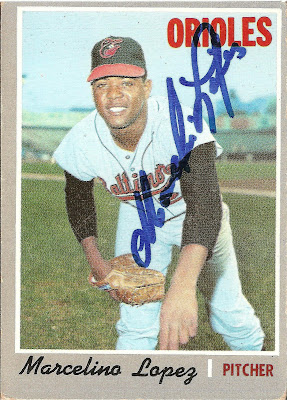 This is a guy whose autograph had eluded me for quite some time before I added this card to my collection. Marcelino has to have one of, if not the best, first names of anyone who has ever played for the O's. It flows right off the tongue. I'm not sure if that's a common Hispanic name but it seems relatively unique, at least among baseball players as he is one of only two MLB players all-time with that first name, so I'd say it's fairly uncommon.

Marcelino's autograph is also pretty amazing. That M is near perfection. Great stuff.

He is best remembered among O's fans for being a member of the 1970 World Series champs, and also came in second (behind the Orioles Curt Blefary) in the 1965 A.L. ROY voting when we was a member of the Angels.

Marcelino passed away in 2001 at only 58 years old. RIP Marcelino. That's way too young to go.