Happy Opening Day everyone. The O's don't play until tomorrow, so today doesn't feel 100% right to me, but I'm still very excited to be watching some "real" baseball.

The Spring Training contest came down to the last few games but the Royals edged out the Giants by a half game to take home the title of the best ST team. The four teams with the best record were all Cactus League teams (Royals, Giants, Rockies, Brewers) and the Astros were the big losers with a 11-24 mark.

Congrats to Alvin who correctly predicted that the Royals would come out on top. He almost nailed their record too by guessing they would go 21-11; they were actually 20-10 which I guess means that they had two ties in there.
Alvin- get in touch with me and we can work on your winnings.

To honor the Royals' dominance, here's a Royals/Orioles mash-up card of Lou Piniella. 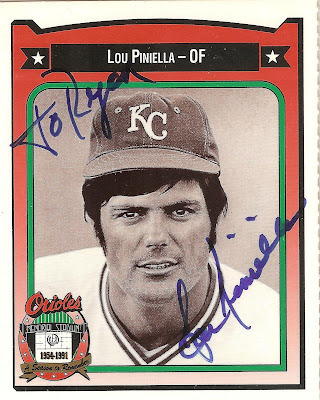 Lou made his Major League debut with the O's in 1964, only appearing in four games with the team, so I guess no one could drum up a picture of him sporting the Baltimore uniform. His first full season was with the Royals in 1969 and he won the A.L. Rookie of the Year. Not too shabby.
Sweet Lou went on to represent KC in the '72 All-Star game, win two World Series with the Yankees as a player & another as the Reds' manager, and win two N.L. & A.L. Manager of the year awards. He's had a long and successful career in baseball and is currently working as a special advisor for the Giants.
Congrats again Alvin!

Great Lou Pinella autograph. How did you get that one signed?

Thanks for the great contest! What would be the best way to contact you?

Zach- Got it through a private signing on SCN. Had been trying to get Lou for a long time.

Alvin- email me at salsmanado at gmail dot com and we can talk. Congrats man!