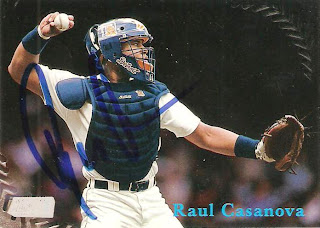 Raul Casanova 2002
This is another card that came my way from SCN user michaeland. There are probably 10 more cards from this trade to show, but I am trying to limit my posts to one card at a time.

Raul's career with the Orioles was a mere blip on the radar; it lasted all of 2 games and one at-bat (a strikeout) at the end of September 2002. Do you remember it? I sure don't. He doesn't have any cards featuring him in an O's uni so this Tigers card works for me.

Outside of his brief time with the Orioles, he has played for 5 other MLB teams, mainly the Tigers and Brewers. Raul is what I would describe as a AAAA player who has had some success in the minor leagues that rarely translates to the big league level for any period of time. He is a back up catcher though, and that's a position that normally lifts a middling player onto a major league roster.

For now, Raul played his last game in the Majors for the Mets in June 2008. The most recent information I could find on him shows that he played the '09 season in the Mexican League for the Broncos de Reynosa.
2 comments: 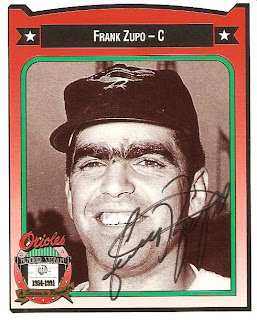 Frank "Noodles" Zupo 1957-58, 61 (died 2005)
The man with the best, bushiest eyebrows in Orioles history played in only 16 games for the Birds over the course of three seasons. While he didn't do much of note at the plate or behind it , he managed to form the only "Z" battery in MLB history, along with George Zuverink, in his catching debut. That's kinda cool. He was also the third youngest player in the Majors over the '57 & '58 seasons.

I couldn't find out how he got his nickname "Noodles" either. So I like to think he got it for having a very weak arm, or liking to eat spaghetti.
9 comments: 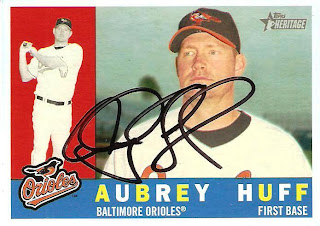 I know that I've complained in the past on here about Aubrey Huff and his signing habits at the ballpark (or lack thereof). In my many games this season, I did not see him sign one thing for anyone at an Orioles game. The only two times I saw him sign over the past two seasons were an O's-Nats game in DC and an O's-Rays game in Tampa Bay. Both times he signed for about 5 people and I missed the cut. And say what you will about this, but I am more likely to cheer for a guy who signs for fans than one who doesn't. Aubs frequently would give little kids a cold shoulder too. That ain't cool LoveSponge!

Well anyway, it turns out that Huffy is a decent TTM signer so I sent this off to him shortly after he was traded to the Tigers. It came back in about 3 weeks, which is a quick turnaround since he would've been on a road trip or two during that time. So I'm now happy that Huff Daddy is going to make the playoffs with the Tigers; as long as they hold off the Twins. It seems like I like him more now that he is on the Tigers.

Aubrey did provide me one of my best baseball memories when I had the pleasure to be at the O's game on June 29, 2007 when he hit for the cycle. It was very exciting to see in-person and was the first time a player hit for the cycle at the Yard.
2 comments: 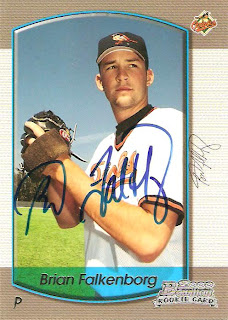 Brian Falkenborg 1999
I got this card in a trade with SCN user, michaeland. It's Falkenborg's only Orioles card, or so I choose to believe, and since he doesn't sign TTM, I was happy to pick it up.

Brian only appeared in 2 games for the O's in 1999, and pitched a grand total of 3 innings. He allowed 2 hits, 2 walks and struck out one. He kicked around the Majors from 2004-08 and pitched for 3 different teams during that time. He is currently keeping the dream alive with the Fukuoka SoftBank Hawks in the Japanese Professional League.

I know this wasn't a very inspired post but I just watched my Nittany Lions suck against Iowa for the second year in a row. I think it's time for bed.
No comments:

A trade with Beardy

I recently was able to work out a trade with fellow O's blogger and infamous trader, Beardy of Beardy's Baseball Blog. He was extremely easy to trade with and even threw in a bonus O's card that he thought I would like; and I do. That bonus card is a Brian Roberts Allen & Ginter game used bat card that I neglected to scan. Oops.

Since I know that Beardy collects everything Orioles related, pretty much as do I, we have some conflicts of interest as far as our collections go. But he specifically collects Markakisisis and he's not so much into autographs, so we had something to go on. I sent him a few Kakes Jr. cards and I received a few sweet O's autographs in return.

Doug was a long time closer who played for 7 teams over his 16 year career, most notably the Indians, Brewers and Astros. He amassed 303 saves, good enough for 12th place all-time upon his retirement after the 2000 season, and interestingly, at 43 years old, he was the oldest player in the Majors during his last season. Doug also was named to 5 All-Star teams and received MVP votes 4 times over his career.

Unfortunately, his one season with the Orioles wasn't what I would call a success. He went 0-4 with 22 saves and a 5.04 ERA in 52 games. That was his highest ERA for any team he played for; not the highest in a season but still, not good. I was really into the O's when he was on the team though and I will always remember his sweet mullet and long 'stache combo. 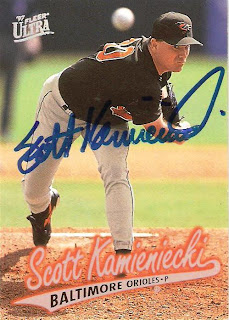 Scott Kamieniecki 1997-99
A starter for his first two years in Baltimore, Scott morphed into a middle-reliever/mop-up guy in 1999. Overall, he went 14-16 and had a 4.71 ERA for the Birds; those numbers were right in line with his career stats. He was regarded as having a very good pickoff move and I like to remember him as being the winning pitcher in game 5 of the '97 ALCS against the Indians, the most recent Orioles playoff win in 12 seasons. It's been a long time...

Kalina helps me remember how to spell his last name by pronouncing it Kam-ean-eyecki. Or something close to that. You get the idea.

So I'm starting a new recurring feature on the blog today; it's called "Unpossible Autographs" and will detail autographs that I buy or trade for featuring Orioles players who have passed away. Hence they are unpossible to get TTM or in person now. (And I know it's actually impossible, but unpossible is a Ralph Wiggum-ism from the Simpsons, and that kid makes me laugh.) 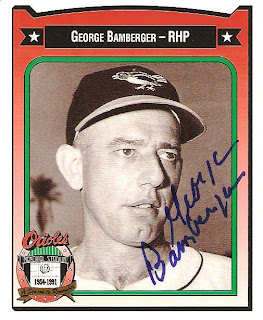 George Bamberger 1959 (died 4/4/04)
I recently bought a small lot of deceased O's autographs and will lead things off with Mr. Bamberger.

It seems as if George was better at teaching others how to pitch than doing it himself. He had a very brief MLB career, and appeared in only 10 games over 3 seasons; 7 of them coming with the NY Giants in '51 & '52. He pitched in only 3 games for the Orioles and racked up 1 start, 1 save and a 7.56 ERA, which really wasn't that bad for him as he amassed a cumulative ERA of 9.42. George spent 15 years in the minors, mainly in the PCL (Pacific Coast League) and won 213 games over that time. 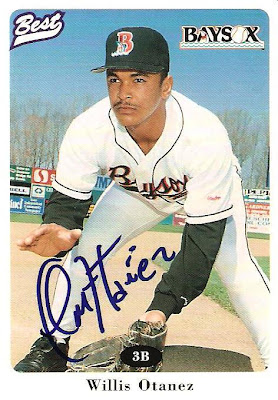