Oops, it looks like I'm a little late to the party on this debut post. Normally I try to cover debuts within a few days of their occurrence but Dariel made his debut during the Orioles' ugly August losing streak and I guess I tuned out of the action for a little bit and then neglected to catch up afterwards. Better late than never should be the new slogan for this blog!

Dariel made his Orioles (and MLB) debut back on August 28th against the Rangers in Texas. To date, he's played in eight games for the Orioles, and has hit .300 with a homer over twenty at-bats. And he's also had an opportunity or two to show off his plus arm by throwing out or holding runners from right field. It kind of reminds me of another player the Orioles had on their team for a few years...maybe someone with a Greek-sounding name, ring a bell to anyone?

Thankfully I was prepared for Dariel's debut thanks, once again, to my dad's OMC's and his time spent autographing during last Spring Training. Dariel seems like a pretty good signer, as he had signed a few of his minor league cards for me over the past few seasons, but once I have an Orioles card of a player signed, I can rest easy knowing that I will never need to add a name to my need list. 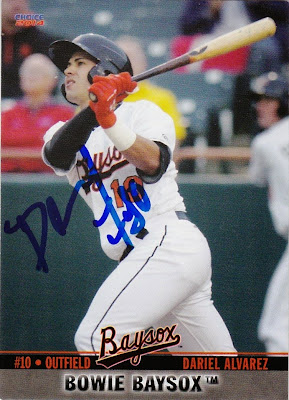 The Orioles signed Dariel in July 2013 after he defected from Cuba, and has spent the past three seasons rising through the Orioles farm system. Over that time, he has also been a member of the 2014 All-Star Futures Game, and won the 2015 International League Home Run Derby.

Over the course of this season, I've been quite confident that Dariel would make his Orioles debut at some point along the way, and I included him as a potential candidate to be Oriole #1000 back in March, April, and June. I was obviously a little off on which debut he actually was, but not about the fact that he did make his debut in 2015. I would expect him to be a part of the Orioles cloudy outfield picture in 2016, and probably beyond, especially if he can move past some unspecified issues that seemed to slow his ascent to Baltimore this year.

At this point in the season, there are no more players who have been called up by the Orioles and have not yet made their Baltimore debuts, although Norfolk catcher Audry Perez was sent to Sarasota as a member of the "taxi squad" in case any late season injuries were to occur, and he has not yet played for the Orioles, so he could technically still appear in a game for the O's in 2015. I would not expect to see him however, so it looks like Dariel will close the book on new Orioles during this season, which means that Orioles #987-1004 happened during 2015.
No comments: