Since I'm about 25 Oriole debuts behind schedule, with potentially two more occurring over this weekend, I've decided to skip ahead a bit. It's much easier to write about more recent debuts than to recall those that happened a year ago. Ideally, I will circle back around to catch up on all of them, but I make no guarantees. 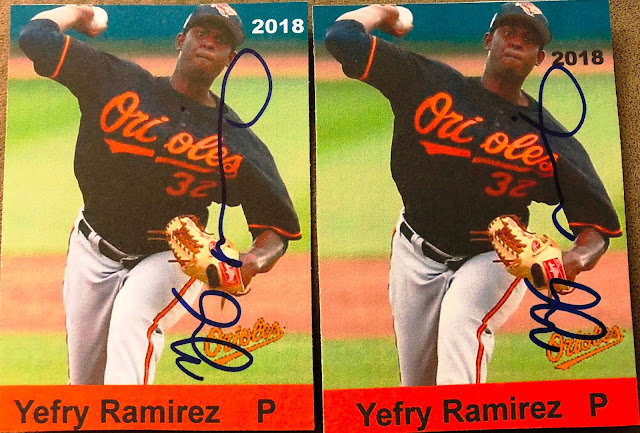 Up today is Oriole #1058, Yefry (pronounced Jeffrery) Ramirez, who made his O's and MLB debut on June 13th against the Red Sox. He was given the tall order to face one of baseball's best hitting lineups and was matched up against Chris Sale, one of the best pitchers in the game, but he was able to keep his head above water. He pitched a respectable 4.1 innings, gave up 3 earned runs, and struck out 6. With the way the 2018 Orioles season is going, he presented himself quite well.

Yefry was sent back to AAA Norfolk after the spot start, but was recalled again prior to yesterday's game against the Mariners. This time he entered the game as a long reliever, and pitched 5 shutout innings. It was an impressive effort, and he seems to be working his way into the future plans of the O's.

The Orioles brought Yefry into their system last summer when they purchased him from the Yankees. He had a 15-3 record at the AA level last year, split between the Trenton Thunder and Bowie Baysox, and seems to have a knack for winning, even if his "stuff" doesn't seem to blow anyone away. It seems like he has an MLB future as a long reliever or back of the rotation starter.

Yefry was kind enough to sign these cards for me at Spring Training this year and one of these Old Man Cards will slide right into my collection. One of my favorite benefits of getting autographs in Sarasota is how it prepares me and my collection for these types of debuts. Semi-unexpected, and I never know which one of the dozens of fringy players will make their way to Baltimore at some point. Thanks as always to my dad for helping me be prepared to get Yefry's auto with his great OMCs. We make a good team! Now if only that could rub off on the Orioles.

While playing catch-up organizationally and blog-wise, it's amazing to me just how quickly my collection got out of hand. I've done my best to periodically organize and scan cards over the past year, but yet, I'm playing a game of what do I have and where is anything. The scans of my Trey Mancini autographs are a nice microcosm of my issues. I scanned all of the cards in this post around the times that I actually got the autographs, but then never labeled them. So I got to blindly click around my scanned cards for a five year period to track these down. But that's enough about me. 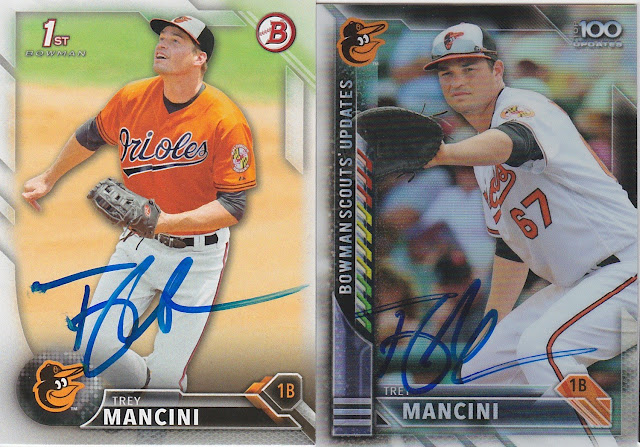 I'm not entirely sure how or why it happened, but I skipped past Trey's Orioles/MLB debut in late September of 2016 when writing my posts at the time. I would speculate that it was a combination of his unexpectedly late end of season call-up, well after the beginning of September when you expect to see guys come up from the minors, and my aforementioned disorganized autograph scans.

After being selected by the Orioles in the 8th round of the 2013 draft out of Notre Dame, Trey steadily rose through the Orioles minor league system, and played at every level from the short season Aberdeen Ironbirds all the way up through the AAA Norfolk Tides. Due in part to his continued ascension, he wasn't included in all of the minor league team sets so he didn't have as many cards as many of his fellow minor leaguers. Neither was he considered a can't miss prospect so Topps skipped him over with their minor league offerings. This led to a smaller number of cards for me to attempt to get signed, which only added to my issues with this post. 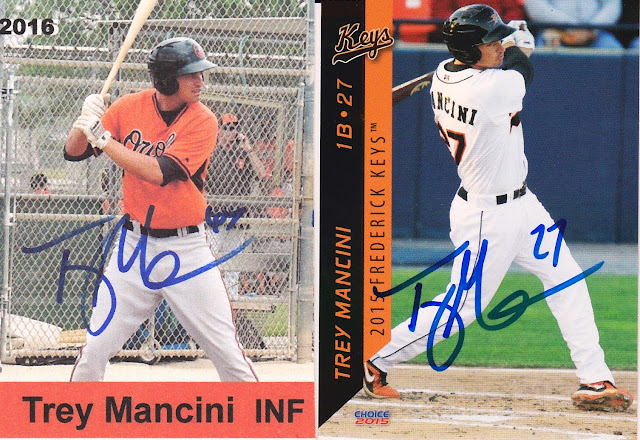 As you can see at this point in this post, in addition to help from my dad with his 2016 Mancini Old Man Cards, I discovered more than enough Trey Mancini autographs throughout my disorganized card boxes and scans. Trey was always a nice guy and willing signer throughout his minor league years, so I never had an issue with him signing, just with my having anything for him to sign. 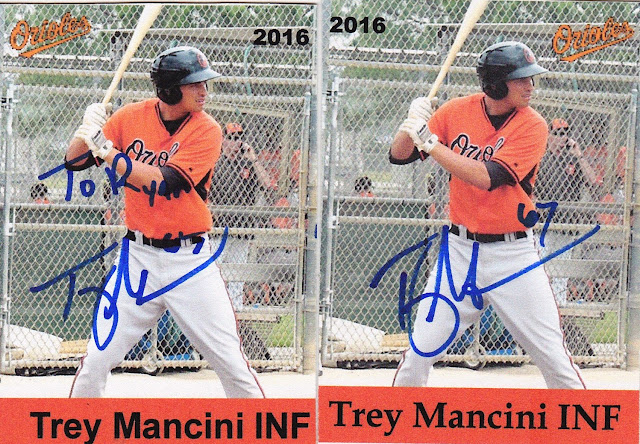 After playing in five games with the Orioles at the tail-end of the 2016 season, and hitting three homers over fourteen at-bats during that time, Trey began the 2017 season as the Orioles everyday left-fielder. As a career first-baseman, he didn't miss a beat during the conversion to the outfield during Spring Training in 2017 and came in third in the American League Rookie of the Year race behind Aaron Judge and Andrew Benintendi. Not bad for a guy who was never considered a top prospect! 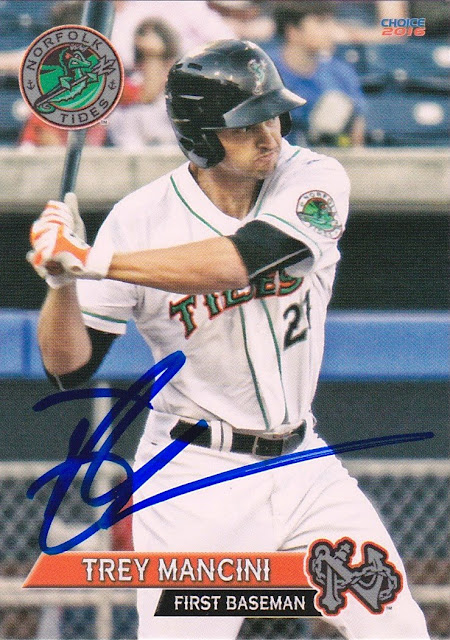 Well, hey there. Remember me? I'm the guy who used to regularly blog about Orioles autographs.

This site will never be what it once was, but I'm reinvesting myself to it in an attempt to at least post about all of the Orioles debuts that have occurred to this point and into the future. The way the 2018 season is going, I wouldn't be surprised if there end up being about 50 debuts this season alone.

To get back into things, I'm going to start where I left off last year. As far as I can tell, Miguel Castro's mid-May 2017 debut was the first one that I didn't post about at that point. So here we go, let's see if I remember how to do this... 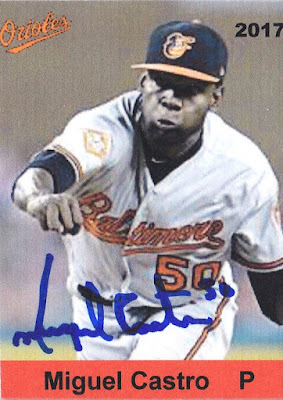 Miguel Castro made his Orioles debut on May 17, 2017 and has been a relatively important middle reliever for the team over most of the past year. He was a nice surprise for the team through most of last season before fading in September but still ended the year with a 3-3 record covering 66.1 innings over 39 games. He's been similarly effective in 2018, and has a 1-2 record with 3.00 ERA over 36 innings in 23 games. Frankly, it's amazing that any pitcher for the 2018 Orioles has a respectable ERA considering the way the season has gone so far.

One thing that really surprises me about Miguel is that he's still only 23 years old; it feels like he's been around for such a long time. He made his MLB debut with a short stint as the Blue Jays closer  in 2015. Later that summer he was sent to the Rockies as part of the (at the time) mega-trade sending Jose Reyes to Colorado with Troy Tulowitzki heading to Toronto.

Miguel struggled in Colorado over the 2015-16 seasons and the Orioles acquired him via a trade with the Rockies in April 2017. They acquired him for virtually nothing since the minor leaguer they sent to Colorado in the trade retired from baseball. The O's got Brad Brach from the Padres in similar fashion, so it's good to know they can make some good moves to combat some horrible big money contracts. (cough Chris Davis cough)

I always like to throw in a big thank you to my dad for creating this Old Man Card (OMC) for Miguel to sign. Miguel graciously signed for me during a stint with Bowie last season, and he still seems to be a good signer even during his time in Baltimore.

It's good to write a post after such a long hiatus and hopefully this won't be the last one!
4 comments: