Wow, sorry about that everyone, I have no idea how I let three plus months go by without a post, although it's become more and more common around here recently. I'm still around, I still collect Orioles autographs, but my priorities in life have just been different as my son is growing up way too quickly.

A recent, unanticipated Christmas gift has motivated me to get my act together for a post. The Orioles added a few veteran players to boost their roster at the end of 2016 and my dad quickly produced Old Man Cards of the trio of Wade Miley, Michael Bourn, and Drew Stubbs. In the few games that we were able to attend towards the end of the season while those guys were on the roster, we unfortunately struck out on getting the cards signed. So my dad took the initiative to send TTM requests to all three guys to see what might happen. I was pessimistic as none of the three seemed to really sign autographs that way, but it never hurts to try.

About a week before we did our family Christmas gift exchange, he got a self addressed envelope back and to his surprise, check out what was inside! 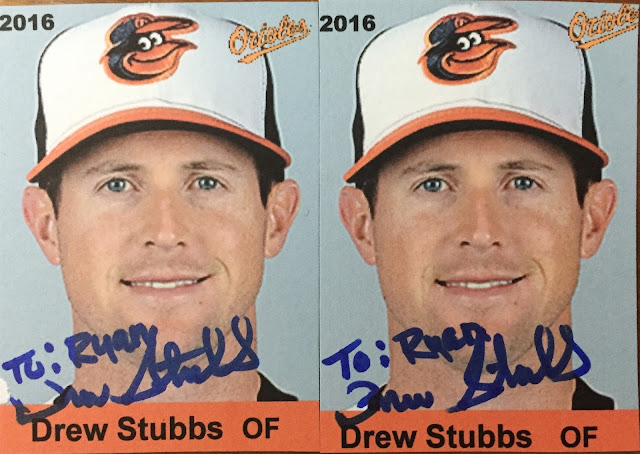 Two signed, personalized Drew Stubbs OMCs! It was a great gift and a truly unexpected surprise to add to my collection. It was nice to knock off another autograph before the end of 2016.

The Orioles selected Drew off of waivers from the Rangers on August 31st, and he went on to appear in 20 games for the O's. He had three hits over 22 at-bats and was mainly used as a late inning defensive replacement or pinch runner. Unfortunately, he didn't make much of an impression in Baltimore and I doubt that he will be brought back in 2017. But thankfully, I don't need to worry about tracking him down with another team to try to get these cards signed.

Thanks for all of your help Old Man. And I hope that you all have a Merry Christmas, and a Happy New Year!
1 comment: