For the first time since I scanned the autographs my dad helped me get during Spring Training, I was actually able to get my act together and organize my cards. Which pretty much means that I have some more autographs to write about, at least theoretically. I just need to find the time and motivation to write with my ever decreasing free time, but isn't that the case for most of us? Anyway, at least I can hang my hat on the fact that I've continued to stay up on the Orioles debut posts, if nothing else. 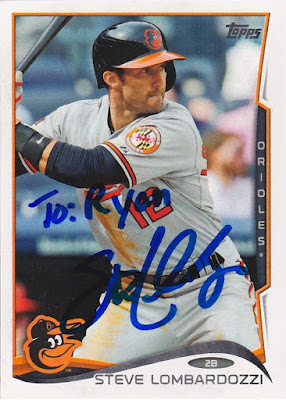 Today's autograph is of Oriole #971, Steve Lombardozzi. Steve played in 20 games for the Orioles in 2014, all but one of which was during April, but he was inexplicably pictured as an Oriole in the 2014 Topps Update set, which came out in October. Outside of my dad's OMC cards, I'm very comfortable in saying that this is the only Orioles card that will ever feature Steve.

He seemed to be a relatively big part of the O's 2014 utility infield plans when the team traded for him late in Spring Training last year, but I got the sense that he must have rubbed some people in the O's organization the wrong way since he was effectively out of the picture after April, even though he was hitting .288. He was passed up for promotion numerous times throughout the season, and didn't even get a September call-up, which was very strange considering that he was on the 40 man roster. Early in February 2015, the Pirates purchased him from the Orioles and that was the end of Lombo's strange stint in Birdland.

It was a relatively disappointing stint because Steve attended high school at Atholton, which is only about 15 minutes from Baltimore and very close to where I live. I had hoped to get a chance to talk to him about playing for his "hometown" Orioles at some point, but unfortunately, he didn't prove to be very fan friendly in my limited interactions with him, something that has been echoed to me by other autograph collectors. But luckily a fellow collector on SportsCollectors.Net was able to help me get his O's card signed and personalized, so now I can remove a name from my list that probably shouldn't have been there in the first place.
No comments: