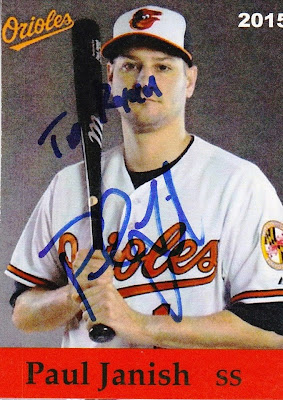 Ah yes, finally another Orioles debut that I was actually prepared for; these are the types of debuts I like, from a collection standpoint at least. Thankfully, my dad got this Paul Janish "old man card" signed during his Spring Training trip so it will now slide right into my collection.

If you've been following my blog, you might have seen this card a few times before since I've included Paul multiple times in some potential 2015 Orioles posts. I listed him among the players who had a chance to be Oriole #1000, which he obviously was not, but 1003 isn't too far off.

Paul was signed by the Orioles as a minor league free agent last November and started the year slowly as he was recovering from off-season elbow surgery. If not for that he would likely have been in the utility infielder competition during Spring Training but he only ended up appearing in 10 spring games before being sent to the minors. He has spent all season with AAA Norfolk and I believe was leading the International League with a .990 fielding percentage (4 errors in 407 chances). He is known much more for his glove than his bat, but the Orioles need an everyday shortstop since J.J. Hardy is once again on the disabled list.

Paul last played in the Major Leagues with the Braves in 2013, and has spent the vast majority of his time in the Majors with the Reds from 2008-11, having appeared in 324 of his 433 MLB games in Cincinnati. He immediately made his Orioles debut the day he was called up, going 1-3 at the plate and showed some solid glove work in the field, as can be expected with him. He played again yesterday, this time as a defensive replacement, so it seems like he might be an (almost) every day player.

I've heard rumors that the O's wanted Paul back next season, as it sounds like he is a good veteran clubhouse presence, and could have a future in coaching if he so desires, so I'm happy to have him on the team. Maybe a steady veteran player can help stabilize the Orioles for the playoff run.

What was it that I just wrote in my last post about how when one player makes their Orioles debut, it seems that a few more are bound to follow? Well, that pattern is certainly holding true right now as Junior Lake was the third player to make their O's debut within a six day span. And he is also the third consecutive player to debut whose autograph is not in my collection, so that's just great. Thankfully, as was the case with Gerardo Parra, there are plenty of certified autographs available of Junior's out there, so it won't be hard to add his autograph to my collection at some point.

Junior was just traded to the Orioles from the Cubs at the trade deadline on July 31st in return for Tommy Hunter. At the time the move was made, I figured the O's were just looking for some salary relief for Hunter and viewed Lake as a controllable asset for the future, since he can't become a free agent until 2020. He has appeared in 193 games for the Cubs over the past three seasons, and hit .241 with 16 homers over his time on the north-side of Chicago. I remember that he sparked a baseball "fight" with the Marlins earlier this year after he hit a home run and enjoyed it a little bit too much.

So far, over two games with the Orioles, he is 1-8 with a double, but made a nice defensive play in left field that was captured in the above picture.

Time will tell what Lake's role will be in the organization, but it's hard to argue right now that just about anyone isn't an upgrade over Travis Snider, who was designated for assignment to make way for Junior.

It's kind of funny to me that it took over a month between Orioles #999, Mychal Givens, who debuted on June 24th, and #1000, Gerardo Parra, who made his momentous debut on August 1st. And then all of sudden, Oriole #1001, Jorge Rondon, made his O's debut the day after Parra. Granted that Rondon's debut did occur because of an injury to Mike Wright, who had just been recalled on July 31st, but still debuts seem to follow a feast or famine type of pattern. And I would certainly expect another handful of debuts to come in the following two months of the season.

Jorge's Orioles debut was quite a successful one, as he pitched 3.1 innings against the Tigers on Sunday, and gave up just three hits while he struck out one in a scoreless appearance. I do not have an autograph of his, and he has very few cards out there, so I hope to get an OMC signed at some point in the near future. He was optioned back to Norfolk after his appearance, but it was due to the roster crunch not his performance.

He has also pitched in the Majors for the Cardinals in 2014 ( 1 game-1 IP, 1 BB) as well as the Rockies earlier this year (2 disastrous games- 1 IP, 8 H, 10 ER, 3 BB, 1 K, 90.00 ERA). He is 27 years old so is past the "prospect" years, but he has 10 years of minor league pitching experience and has absolutely dominated at AAA Norfolk this season to the tune of a 1.93 ERA over 25 appearances out of the bullpen to go along with 37 strikeouts over 42 innings. Also he has an all-important spot on the 40 man roster, so I would certainly expect him to be back in Baltimore at some point this season.

Well, Oriole #1000 has finally made his debut, and it's none other than Gerardo Parra, an Orioles trade deadline acquisition from the Brewers. The Orioles gave up their #3 prospect, Zach Davies, to make the deal, so only time will tell to see if Gerardo is enough to push the 2015 O's to the playoffs, but you have to take some risks when you are in the playoff hunt. 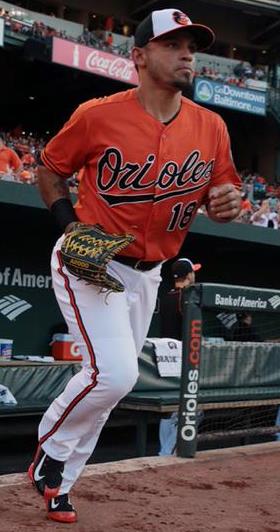 When Gerardo ran onto the field for Saturday night's game against the Tigers, as the Orioles starting left-fielder, he forever cemented his name into the record books as the 1000th player to appear in a game for the Orioles. He was the first new Oriole to debut in over a month (Mychal Givens became #999 way back on June 24th), and I started to assume that #1000 would be a player acquired in a trade as July ticked by and no other players were being recalled from the minor leagues. 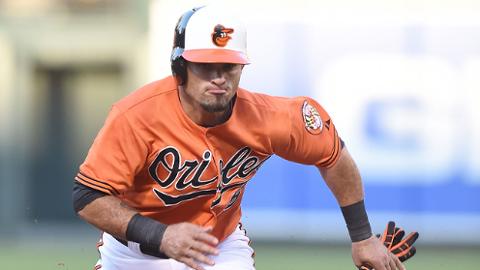 I wrote at least three posts about the various minor leaguers in the Orioles farm system who had the potential to become #1000, and I have to admit that I personally hoped that the player who debuted as that special number would have been one of the long-time players in the farm system who I have enjoyed watching play over the years at the various rungs on the O's minor league ladder. Admittedly, Eddie Gamboa was my specific hope for #1000, but that's really not here nor there. In my posts about the potential #1000, I certainly conceded that he could be someone who wasn't in the O's organization and that it would have been silly to blindly speculate about the 100's of other MLB players on different teams. In fact, I don't think I would have even guessed that #1000 would be Parra as of a week ago. 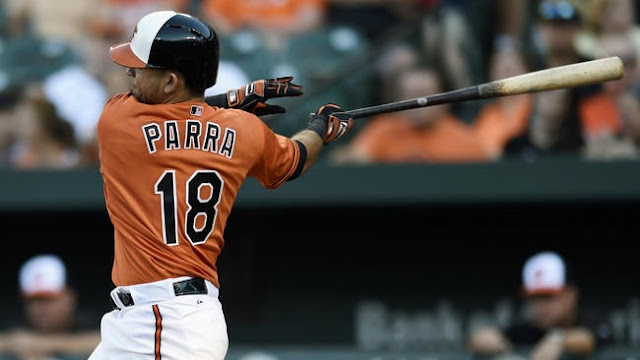 Now that Gerardo is in town, he's certainly a major upgrade over pretty much anyone the Orioles have been playing at the corner outfield spots over the course of the 2015 season, so the trade certainly looks good on paper. And it didn't hurt that he doubled in his first at-bat for the Birds. 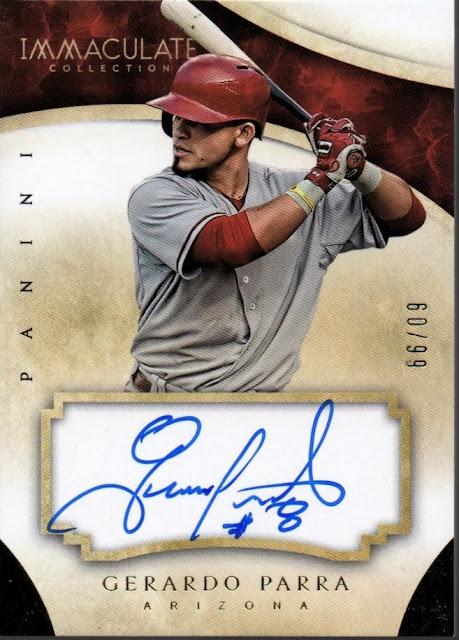 For the time being, mainly because it was very hard for me to justify NOT having an autograph of Oriole #1000 in my collection, I bought this nice autograph of Parra online to plug into my collection. He certainly has a unique and elaborate autograph, and I have to wonder how this one would compare to his in-person signature. My dad was already fast at work making Gerardo's first Orioles cards, so with any luck, I will get one of those signed in the near future too.

Congratulations to Gerardo Parra on becoming the 1000th player in Orioles history! Oh, and check out this cool infographic the Orioles created to mark the momentous occasion!