2013 Topps Update came out last week, and has been my policy for much of the year due to my decreased card storage space, I haven't purchased any of it yet. I might get a pack or two here or there, but I think my days of trying to complete these sets are over. I don't even have room for the sets that I already have, and need to make some tough decisions about what to keep or get rid of sometime soon.

Anyway, I digress. Recently, I have just been cherry-picking the Orioles team sets off of ebay, depending on how many new players are included in the set. I really don't need any more cards of Adam Jones, Nick Markakis, or Brian Roberts. Since I'm not a player collector, I think 100 or so cards of each of them is more than enough.

With the release of every Topps Update set, I just cross my fingers and hope that not many, if any, of the Orioles included need to be added to my need list. But every year it happens, as a few players are pictured for the first time as an Oriole on cardboard. Last year it was Matt Lindstrom, Ronny Paulino, and Luis Ayala. This year it's K-Rod and Bud Norris.

Since my dad began making his Old Man Cards of the Orioles earlier this year, it has made the autographing process easier for me. If I had one of his OMC signed by either K-Rod or Bud, then I wouldn't need to add them to my need list, but unfortunately, that's not the case. I was not able to get either of their autographs after they joined the team, and K-Rod even turned me down in what seemed like a very ideal chance to get his signature. 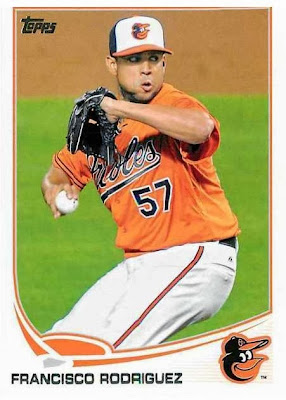 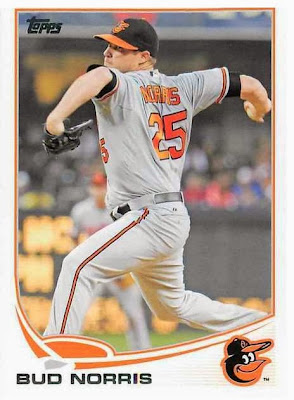 I'm not too worried about getting Norris to sign a copy of this card since he is likely going to be a member of the Orioles for a few more seasons. But I don't see K-Rod coming back to town, and he doesn't exactly seem to be a good signer, so I am concerned about my prospects of getting this card signed by him. Hopefully it will happen one day. 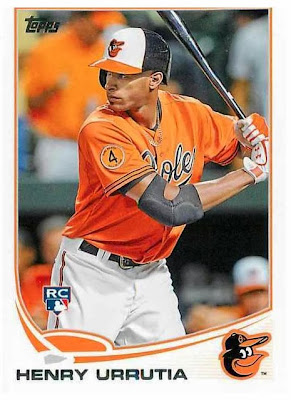 The 2013 Update set also includes the first official Orioles card of Cuban rookie Henry Urrutia, but since I happily already have an OMC signed card of him, I don't need to add his name to my list. But I will likely still try to get this card signed since he is wearing an orange uniform and all, and I still do collect signed orange uni cards.

Considering that I haven't exactly had a ton of time for autograph collecting and/or blogging over the course of the 2013 baseball season, I consider myself pretty fortunate to still be able to say that I have an autograph of each and every one of the 966 players who has appeared in an Orioles uniform over the team's 60 years of existence.

Since I now possess autographs of all the 24 players who debuted over the course of the 2013 season, here's the breakdown for how those autographs came to be in my collection:
Obtained from player in minor leagues: 5
Obtained in-person from the player at MLB level: 5
On consignment from another collector: 3
Purchased online: 11

Quite a difference from past years when it probably would have looked something more like 30% obtained in minors, 60% obtained at MLB level, and 10% purchased. But such is the way things go when one doesn't have time to get autographs in person. Luckily, every one of the 11 autographs that I bought are certified signatures, and none were particularly expensive. In fact, most were quite cheap, which is perfect for me.

Without further ado, here are the three latest autographs that I purchased from COMC.com. (As you can see, I haven't had time to scan my own autographs yet, so I grabbed screenshots from their website. Hey, it's better than a post without pictures, am-I-right?)

Dan Johnson- there are a startling number of certified autographs of his out there; I tend to forget that he was something of a prospect back in the day

I was very pleased that all three of these autographs are on-card, and that all look pretty nice, although Clevenger's autograph leaves something to be desired.

These three will likely stay in my collection unless I'm able to get any of these guys to sign one of my dad's custom OMC Orioles cards. Though I would guess that only Clevenger is back in the system in 2014, so that will complicate things with the other two.

I also have a sneaking suspicion that Topps will be a jerk and include Morse as an Oriole in their 2013 Update or 2014 Series One set since he's something of a "star" although he did next to nothing during his month with the Orioles. If he is included on a Topps card than I have to add him to my need list, which I would greatly prefer not to do.
1 comment:

After spending the entire 2013 season on the Orioles 40 man roster, and having joined the team at least two previous times throughout the season without having appeared in a game, Mike Belfiore finally had the opportunity to make his O's and MLB debut on the last Friday night of the season against the Red Sox, and he will forever be the 966th player to wear the Orioles uniform. 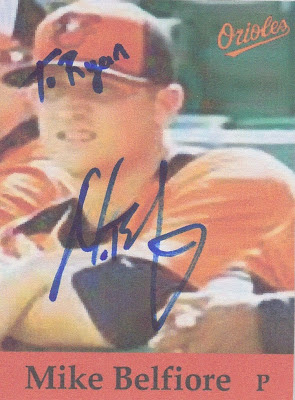 Two previous times this season, I had speculated that Mike was going to make his Orioles debut, once during Spring Training, and again in May when he was called up to join the team. Obviously, my timing was off, but I'm sure that Mike is pleased either way to have gotten his Major League debut under his belt. Unfortunately, it didn't go the way I'm sure that he would have preferred as he gave up three hits, including two homers, and walked a batter over an inning and a third. Better luck next season Mike!

I've been fortunate enough to have gotten Mike's autograph a number of times during the 2012 season when he arrived at AA Bowie, having come to the organization from the D-Backs in return for the ultimately disappointing Josh Bell in a May 2012 trade. And thanks again to my dad's OMC production, I already have a signed, personalized Orioles card of Mike in my collection, so I will never need to worry about an upgrade.

The Orioles ended the 2013 season with 24 new players having made their black and orange debuts, from Alexi Casilla near Opening Day, to Belfiore near the end of the season. The Birds didn't quite have it in them to make the playoffs this season, but I'm happy they remained in contention through the final week of the year.

Hopefully next week I will have time to do a quick rundown on all the players who made it into a game for the O's this season.
No comments: