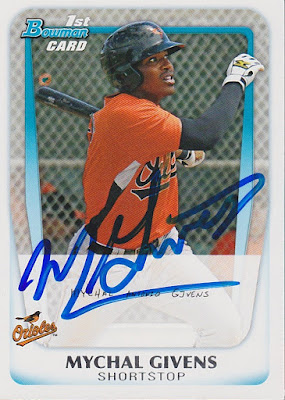 Wow, I hope that none of you read my post from last week speculating about who the one thousandth Oriole might be, seeing as how I listed ten potential candidates to make their Orioles debut, and not a single one of them was Oriole #999 Mychal Givens. Partially, this is because I chose to focus on the potential debuts of players at the AAA level to somewhat limit the pool of candidates (outside of Bowie Baysox pitcher Tim Berry, who was on the 40 man roster). Additionally, Givens hadn't been invited to the Orioles big league Spring Training, generally an indicator at the time about a player's general standing in the organization. HOWEVER, Givens is a name that Buck Showalter has mentioned multiple times this year in assorted interviews and once Buck has an eye on you, it generally means positive things about your future. 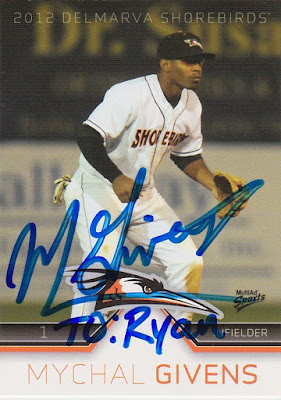 Givens has a pretty interesting history in the O's farm system, as he was drafted in the 2nd round of the 2009 draft, and the Orioles decided to have him play shortstop. Apparently, coming out of high school, many other teams like his arm better as a pitcher and thought he had a brighter future on the mound than at short, but the O's thought otherwise. 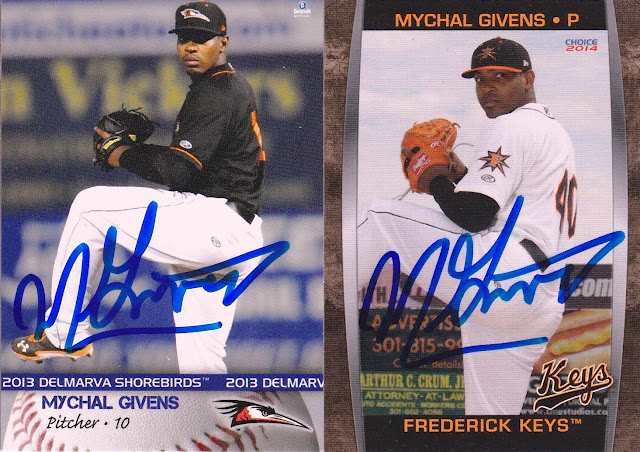 After three relatively unremarkable seasons in the field and at the plate, the Orioles finally conceded that Givens might do better as a pitcher and moved him to the mound in 2013. Success didn't come right away, but apparently once someone changed his mechanics to throw from a three quarters arm slot, his velocity and results improved. This past Saturday, the Orioles selected Mychal's contract from AA Bowie and added him to the 25 & 40 man rosters. After watching three games from the bullpen, he got to make his Orioles & MLB debut in last night's game against the Red Sox in Boston. He needed only 11 pitches (8 of which were strikes) to retire the "heart" of the Sawx batting order, including two ground-outs and a four pitch strike out of Mike Napoli. 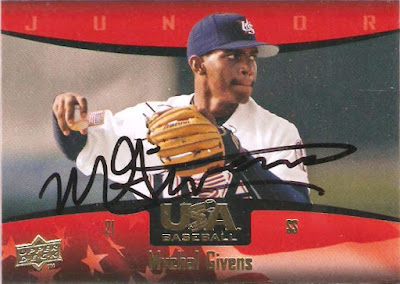 Mychal was optioned back to AA Bowie prior to today's game to make space of the roster for Miguel Gonzalez, but he sure showed some promise in his debut. Especially since he is now on the 40 man roster, I wouldn't be surprised to see him back in Baltimore sometime soon.

And for the record, I'm pretty sure that I have a personalized autograph of his Bowman Orioles card at the top of this post. I'm pretty sure he signed and personalized both a copy of that card and the Shorebirds card for me at the same time, but all of my stuff is pretty unorganized these days. Regardless, congrats on your debut Mychal!
2 comments:

Since the Orioles are knocking on the door of having the 1000th player in team history make his debut for the club, I figured that it's once again time to look at the possible candidates for that milestone number. Back in mid-April, I wrote two posts about some of the players who were likely to make their O's debuts in the near future. At that time, following the Opening Day/week debuts, the team was still nine players away from debut #1000.

The most likely candidates to make an appearance on the team were fairly easily identified as those already on the team's 40 man roster. Since those posts and from the guys who were on the 40 man at that time, Oliver Drake, Tyler Wilson, Mike Wright, & Rey Navarro have all made their Orioles debuts. In addition to those guys, Chaz Roe, Cesar Cabral, and Chris Parmelee have also been added to the 40 man and have made their Orioles debuts.

Still remaining on the 40 man roster, and having not yet made their Orioles debuts are: 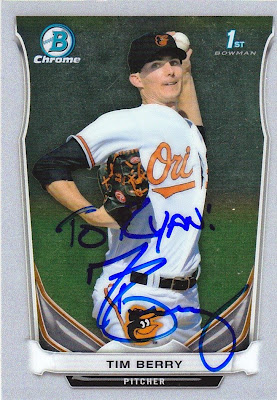 Tim Berry, who is currently struggling with a 2-5 record and 6.99 ERA at AA Bowie, 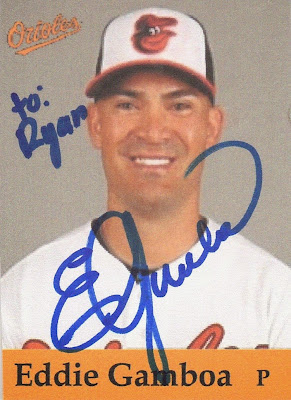 Of those two, I would say that Gamboa is a strong candidate to make his Orioles debut in the relatively near future, especially considering the O's already called him up to Baltimore once earlier in the season but he didn't make it into a game at the time. Conversely, Berry is a candidate to be removed from the 40 man and I don't think we will see him in Baltimore anytime soon. 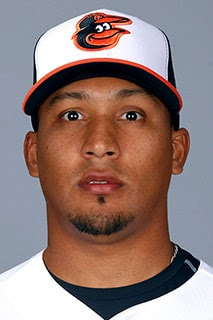 The O's have also added reliever Jorge Rondon on a waiver claim from Colorado in early May and he now resides on the 40 man roster as well. He has pitched in 12 games for the Tides and is 2-0 with a 2.89 ERA so he is certainly a viable candidate to make an appearance for the O's.

Beyond those three members of the 40 man who haven't yet played for the O's, I would say the likely or possible members of the Tides to make it to Baltimore are, in no particular order, Dariel Alvarez, Paul Janish, Julio Borbon, Pedro Beato, Michael Bowden, Zach Davies, and Pat McCoy. Prospect types like Alvarez and Davies will almost certainly play for the O's at some point, barring a trade or an injury, but who knows when that could be? Beato, Bowden and McCoy are all pitching well for the Tides, and I know that Buck seems to like the defense of Janish and Borbon, so that keeps them as possibilities.

There are obviously thousands of other players currently playing for the other 29 MLB teams and their affiliates that could come to the O's in some sort of trade, but I just can't assess the likelihood that any of them come to Baltimore and appear for the Birds.

After all of that analysis, here's my final prediction for Oriole #1000...Eddie Gamboa! Time will tell if I'm right, but I would expect #1000 to occur within the next month-ish, so the wait shouldn't be too long! Let me know who you think #1000 could be in the comments.

Did you all happen to catch the O's game last night? It was a slobber-knocker as the Orioles demolished the Phillies 19-3. They hit 8 home runs in the game, which is an all-time team record, and my dad and I had actually talked about going to the game before deciding against it. Oh well, at least it was fun to watch on TV. And Chris Parmelee contributed to the win with one of the best ever offensive debuts by going 4-6 with two home runs. 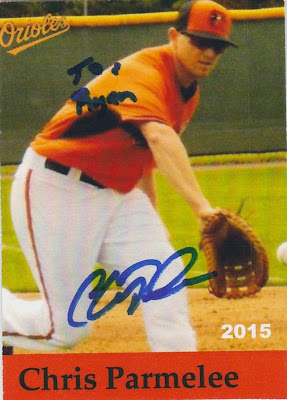 Apparently, Chris was only the second Orioles player ever to hit two homers in his debut, following Sam Horn on April 9, 1990, and just the third with four hits in his debut following Horn and Ronny Paulino on April 7, 2012. Let's just hope that Parmelee's time in Baltimore ends better than Paulino's did, as he ended up with just twelve additional hits over nineteen games following that four hit debut.

Parmelee has a decent track record, as he was the Twins first round selection (20th overall) in the 2006 draft. He played for the Twins from 2011-14, but never appeared in more than 101 games in a season, and finished his time in Minnesota with a .249 average, and 24 home runs over 273 games.

The Orioles signed him as a free agent this past January and he had been tearing up the AAA International League all season long and was hitting .312 with 6 homers and and on-base percentage near .400 over 61 games. However, he wasn't on the Orioles forty man roster, and is pretty much a 1B/corner OF of which the O's already have too many guys taking up spots on the roster. But they had to give him a shot or risk losing him to a competitor as he had a June 15th opt-out date. And I know that it's a very small sample size, but the move is already seeming to pay dividends. Now if he can only continue to produce, he should settle in nicely on the team.

As I so often write, thanks goes once again to my dad for his helping making this Old Man Card as well as getting it signed for me on his Spring Training trip. Thanks to him, this will slide very nicely into a permanent spot in the collection.

Since Parmelee is now officially Oriole #998, we are really knocking on the door of the 1000th debut in team history. I'm pretty sure that very few people are as excited for it as I am, but it's a cool milestone and I can't wait to see who it will be; I think I should do an update post about the remaining candidates for #1000. Hopefully I will get that up in the next few days.
2 comments:

We are getting closer and closer to the magical number for Oriole #1000; who will it be? Since I posed the question back in April, six players from the Tides have made their debuts, and now we are just three away. Maybe it's time to revisit the question. But today's focus is on the 997th player to appear in a game for the O's, Cesar Cabral.

Now most of you probably are probably aware that I don't much care for having signed Yankees cards in my collection, but for the time being, this is Cesar's only card in major sets. And, I certainly prioritize having any sort of autograph over my dislike of signed Yanks cards, so for now, this is in my collection.

Cesar has quite the interesting transaction history, most of it occurring with the teams of the AL East. He was originally signed as an amateur free agent by the Red Sox back in 2005; the Rays then selected him in the 2010 Rule V draft. Over the course of 2 weeks during spring training 2011, he was picked up on waivers by the Blue Jays, then the Rays again, and eventually returned to the Red Sox. After the 2011 season, he was again taken in the Rule V draft, this time by the Royals, and then was purchased by the Yankees. Got all that?

He eventually made his MLB debut with the Yankees in September 2013, and would pitch a total of twelve games with the Evil Empire over the '13-14 seasons, ending up with a 7.71 ERA over 4.2 IP, so he's definitely a LOOGY (lefty one one guy).

The Orioles signed him to a minor league contract this past January, and he actually never even pitched for the big league club during spring training, so it's a pretty impressive feat for him to be off the radar in March and now pitching for the team in June. But that is what having a 0.00 ERA and 25 K's split between 21 games at AA Bowie(2) and then AAA Norfolk(19) will do for a guy. And he's been good with the O's so far too, with two hitless/scoreless appearances totaling an inning of work.

Keep up the good work Cesar!