I know that I'm skipping a few debuts at this point, but July/August is always a hard time of the season to keep up with autographs on the team as players are traded or acquired from other organizations and I don't have their autographs waiting to add to my collection. So I'm going to move ahead with a debut I was prepared for; that of the Orioles 9th round draft pick in the 2010 draft, Parker Bridwell. 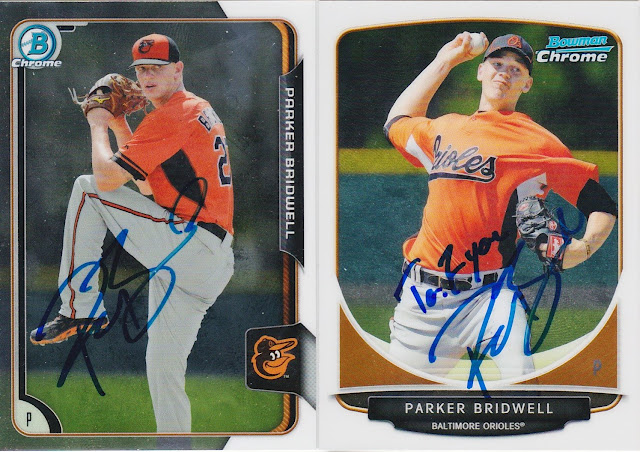 Parker was drafted out of Hereford High School in Texas, and apparently could have been the quarterback at Texas Tech if he had chosen to go that route, so it seems like he was an all-around gifted athlete in high school. He worked his way through every level of the Orioles minor league system over the past seven years, at times seeming like a sure-fire Major Leaguer following up with other stretches where it seemed like he would never make it to the show. 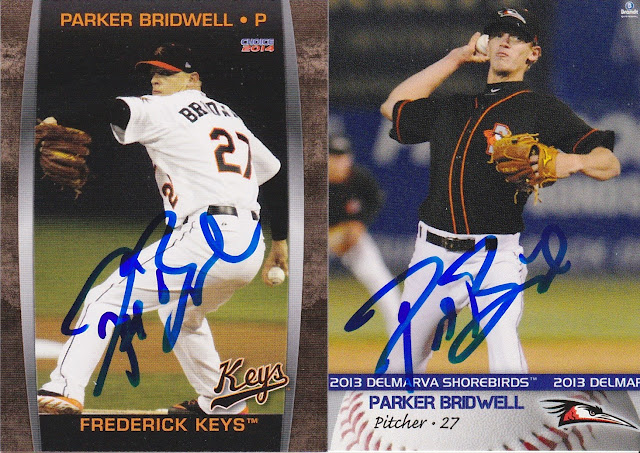 He has consistently been ranked as one of the Orioles highest prospects, owing at least in part to their shallow farm system, and was added to the 40-man roster prior to the 2016 season to protect him from the Rule 5 draft. Parker was also invited to the big league camp for the first time in 2016 so all the signs seemed to be pointing in the right direction for him. However, during the season, he battled some injuries and was also moved to the bullpen, where it seems like the team thinks his MLB future might be, so it took most of the season before he finally got the call to the O's. He made his MLB debut on Sunday August 21st against the Astros, and pitched two innings in relative mop up duty to help out the overtaxed Orioles bullpen. He gave up two hits, including a HR, and struck out two Astros batters. 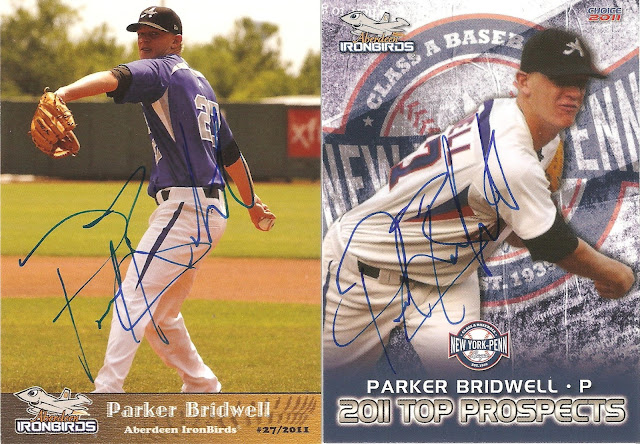 I have a number of Parker's signed minor league cards from over the years, although he pitched in Aberdeen and Delmarva, two places that I didn't often get to during the years that I made it to the most minor league games. It feels nice to once again have been prepared for the debut of a new Oriole!

Parker has always seemed like a decent guy so I hope that he has finally found his way to the Orioles permanently. Good luck to him! 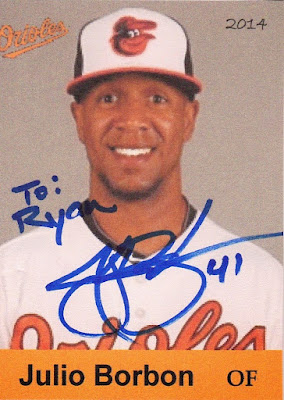 Julio Borbon has lived on the periphery of the Orioles Major League roster for the past three seasons. He has been a guy whose name Buck Showalter has continued to randomly bring up at times when discussing players in the system that he likes, but Julio was consistently passed over when minor league outfielders were called up to Baltimore. I don't exactly know why that was, but he finally made his Orioles debut on July 20th.

Julio was originally brought into the Orioles fold during the Rule V draft way back in December 2013 when the team selected him from the Cubs organization. I don't know how a player who had played in almost 290 MLB games over parts of four seasons (mostly with the Rangers from 2009-11) was eligible for the Rule V draft but that's a post for another day.

The signed card at the top of this post was back in the early days of my dad's Old Man Cards and was made prior to spring training 2014. I wrote a post about this back then, but for whatever reason during my time spent chasing autographs that spring, Julio and Delmon Young were the hardest autographs for me to get. Luckily, on the last day of my trip, Julio did sign and personalize this card for me, so I've been ready for his O's debut for two and a half years.

The Orioles resigned Julio to a one year contract in 2015 and again in 2016, so there obviously seems to be something working between the team and him even though he continued to play solely in the minors. Interstingly, Julio was playing with the AA Bowie Baysox when he got called up to the Orioles, which means that at this point, the O's seem more likely to call up guys from AA than AAA to help in Baltimore. Hey, however they win is fine with me.

Once he made his Orioles debut, Julio played in five consecutive games for the team, and went 2-9 with a run scored. The team then outrighted him back the minors, which he apparently could have refused, but he once again opted to stay in the organization. So maybe we will see Julio in Baltimore again at some point, possibly in another 2-3 seasons.