Hey, something to get excited about, a post with actual autographs AND pictures. That's probably why you checked this site in the first place!

Two players on divergent career paths both made their Orioles debuts during Wednesday night's game against the Blue Jays. Since they both made their debut in the field in the top of the first inning, I have to use my debut tiebreaker system of the numbered positions on the field to declare Jonathan Schoop (pronounced scope) (2B) Oriole #964, while Jason Pridie (pronounced pry-dee) (CF) becomes #965. Schoop is the O's top minor league position prospect whose debut was also his first MLB action, while Pridie has mostly been a minor league journeyman, and the O's are the fourth big league team that he has played in a game for at the MLB level.

I was lucky enough to be at the game, and had some amazing seats to boot. All the better to take some quick shots of the two guys making their black and orange debuts. 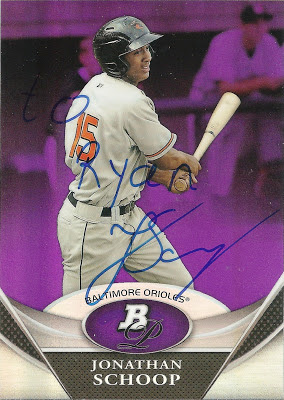 I was specifically excited to see Schoop's debut, as he has been one of the O's top prospects for a few years now. He has played primarily second base and shortstop in the minors, but can also man third base. In 2011 and most of 2012, he and Manny Machado played together at Frederick, and then Bowie to form a double-play combo with some serious MLB potential. I think that Machado has already surpassed his early career expectations and I'm hoping that Schoop will have the opportunity to make the club at the start of 2014. 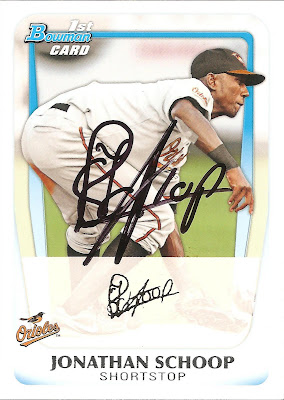 Jonathan was one of the players whom I discussed possibly making the club out of Spring Training this past year, but there was ultimately way too much competition for the Orioles 2B job in 2013. Next year should be a clearer path with the end of B-Rob's contract and the unlikelihood of Casilla's return. 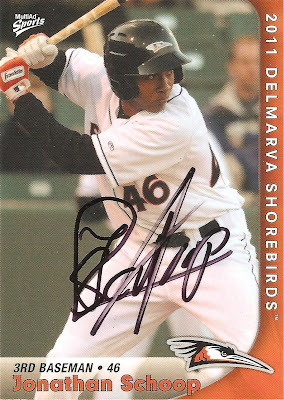 Schoop has always seemed exceptionally down to earth and should be an extremely easy player to root for; just ask my dad who was fortunate to have a nice conversation with him in our hotel lobby upon Jonathan's return from playing for the Netherlands in the World Baseball Classic this year. As you can see, he also has been kind enough to sign a number of autographs for me over the years.

His MLB career began with a bang, as he went 2-3 with a HR and three runs scored in his first MLB game. 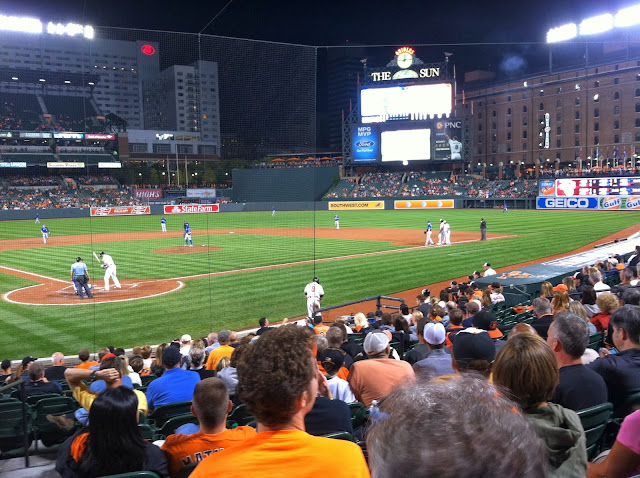 And here he is crossing home plate following his HR. He became just the second Oriole ever to homer in his MLB debut, following Larry Haney in 1966. 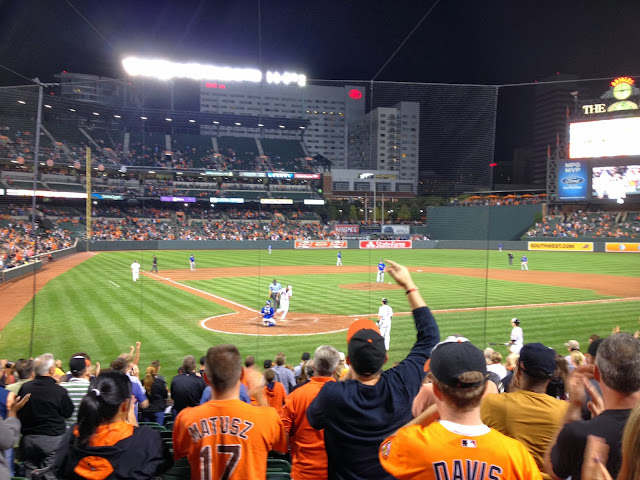 I can pretty confidently say that this is currently the only signed Jason Pridie Orioles card out there, thanks to my dad's old man card production, in addition to a helpful graphing buddy in Norfolk, as I personally missed out on Pridie during Spring Training. For quite some time, it seemed like a forgone conclusion that Pridie was not going to play for the 2013 O's, mainly due to his absence from the 40 man roster, and after his name was not included in the September call-ups, I put this card in my trade pile.

But he was definitely a Buck Showalter kind of player whose name had come up over the course of the season so after AAA Norfolk's season ended, the O's sent him to Sarasota to remain fresh in a sort of taxi-squad type of situation. They needed a fresh player after Manny Machado's nasty knee injury coupled with Chris Dickerson's hamstring tweak, so Jason finally made it to Baltimore.

Here is his first at-bat with the O's 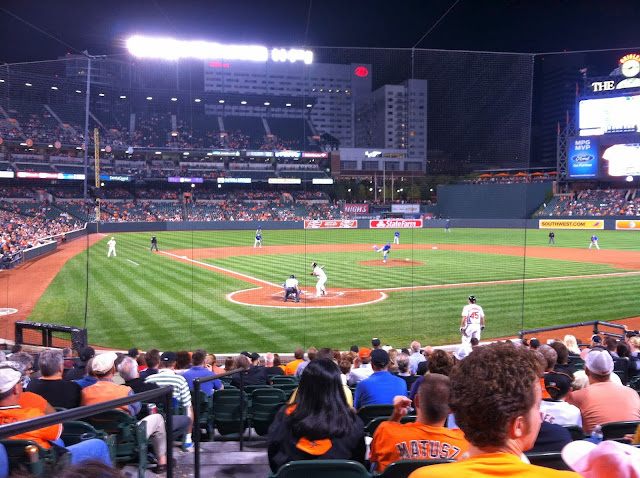 So far in two games with the O's, he is 2-7 with an RBI, and has played left- and center-field. He also had an unfortunately timed error in last night's game when he straight flubbed an easy fly ball with two outs which allowed a Blue Jays runner to score from first base to take a 1-0 lead. But luckily the Orioles came back to win so it didn't cost them the game, though that is the kind of play that can leave behind bad memories when considering off-season roster moves.

Interestingly enough, I also read that these two debuts have pushed the Orioles to having used 54 different players during the course of the 2013 season, which ties the 1955 Orioles for most in franchise history. And it is absolutely crazy to think about that many players appearing in a game for the team in a single season, especially when that team remained in the hunt for a playoff spot until the final week of the season. Expect a run-down on the 54 players next week.

Wow, I can't believe that it's been an entire month since I have posted. I'm slightly embarrassed, but what can I say? Life just gets in the way of the fun stuff sometimes, and honestly, I've been a pretty bad "blogger" for most of this summer. I don't even have that much time to write today, but I wanted to just re-touch base with the Orioles Autograph "World" out there, just to let everyone know that I haven't completely gone away.

One issue with today's three subjects is that I don't have an autograph of any of the trio, so this will be a non-visual post. I will hopefully rectify the new holes in my collection in the near future, but for now, these three all go on my need list.

Morse was acquired from the Mariners for OF prospect, Xavier Avery, back on August 30th, just ahead of the waiver deadline, which means he was passed through waivers before he was eligible to be traded, and can still be on the O's 25 man postseason roster. Although, since he currently only has hit three singles in 24 ABs and is playing only part-time, I would be surprised if he was included, should the O's force their way into the October baseball picture. So far, this trade is a bust, and since Morse is a free agent at the end of the year, it's becoming more and more unlikely that he will make any impact for the team, although I suppose that could change with one timely swing of the bat.

At an Orioles-Nationals game that I attended with some friends years back, I heckled Michael by yelling "Morse Code" (not my best effort, but I'm not much of a heckler) and one of my buddies still reminds me of that to this day.

I mentioned Clevenger's name in the post I wrote about the trade that hinged on Scott Feldman's arrival from the Cubs. Steve was included in the deal since the Orioles needed some catching depth in their system, and it's a cool story since he grew up in the Baltimore area and was/is an Orioles fan. Although he has appeared in games for the Cubs over the past three seasons, it was probably a lifelong dream-come-true to get into a game for the Orioles.

He has appeared in just that one game to this point, but he was a major reason the Orioles came out on top in that game, as he hit a 2 RBI double to tie the game after the O's had been trailing the Jays 3-1 in the 7th inning. The Orioles continued the comeback to win 5-3, and Clevenger is 1-4, with that double and 2 RBI in his Baltimore career. Currently, he has been a better contributor, and much cheaper, to the team than Morse has been.

I have to admit something about Dan Johnson, something that hasn't happened to me in years. I had no idea that he was even in the Orioles' farm system until I heard he was being called up. And I'm the kind of fool that keeps track of all 60 of the players who the O's invite to Spring Training every year, so this was somewhat of a big deal to me, and a true sign that I'm off my Orioles autograph game.

Anyway, Dan has a single Orioles at-bat to his name so far, when he appeared as a pinch-hitter to lead off the 9th inning against the Blue Jays. He struck out swinging, and the O's lost 4-3. I wouldn't be completely surprised if that is the extent of Dan's career in the black and orange. Which gives me an idea for a future post, one at-bat O's. At my current rate of posting, I will write that up in 2020.

For those of you out there who are working with me on trades, don't worry, I haven't forgotten about you, but I just need to find time to process everything. And I hope that this isn't my only post for the next month, but time will tell!