As I anxiously await my trip to Sarasota for Orioles Spring Training, I figure that it's about time to wrap up the 2016 debuts before the 2017 season officially starts. I will attempt to do a better job with keeping these posts timely during the upcoming season, since they are essentially about the only posts I keep up with at all these days. I think that I'm beyond apologizing for lengthy delays between posts at this point, it just is what it is, but I don't want the blog to completely die off at least.

My parents have already been enjoying the Florida weather for a few weeks now and I'm extremely jealous happy that they have are getting to watch baseball as I continue to sit around in Maryland. But since my dad enjoys getting autographs almost as much as I do, it does come with the nice benefit of his already graphing some of the players that I might need for 2017. As well as tracking down one player that I still needed from 2016, Michael Bourn. 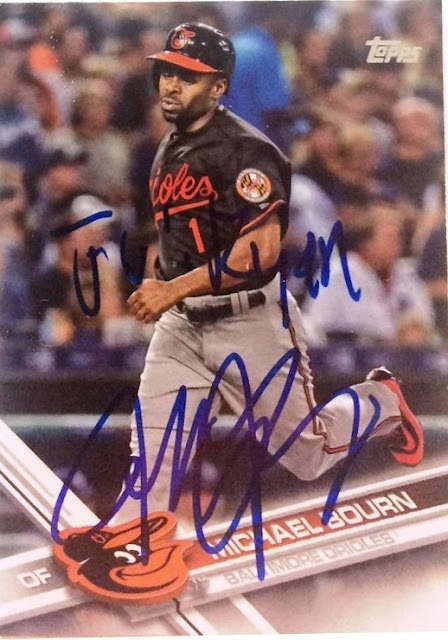 Michael was traded to the Orioles from the Diamondbacks on August 31, 2016, made his Orioles debut on September 2, and went on the appear in 24 games for the O's over the last month of the season. He will be best remembered for starting a relay throw on September 16th against the Rays. In the top of the ninth inning, he fielded a line drive down the left field line and started a 7-5-2 relay to throw out the tying run at the plate, locking down the win and preserving Zach Britton's perfect season.

I failed in a few attempts at getting his autograph last season, and once he was included as an Oriole in the 2017 Topps set (and late the '17 Heritage set), I had to add him to my need list. As the off-season lingered without his signing with a team, I was concerned that his time in baseball might be over and I would not get a chance to have him sign one of his Orioles cards. Fortuitously, he re-signed with the Orioles on February 20th and my dad wasted no time in getting him to sign and personalize this card for my collection.

Thanks for your help yet again Old Man! I'm looking forward to joining you in Florida!
3 comments: