The most recent Orioles debut surprised me somewhat, mainly due to how late it was happening in the season. Christian Walker was just called up to the O's after they clinched the AL East on Tuesday night. He had to be added to the 40 man roster and his service clock is starting now, so you know that the team must see something that they like in him. It also is fairly directly tied to Chris Davis's positive adderall test and suspension and the need for another first baseman on the roster. 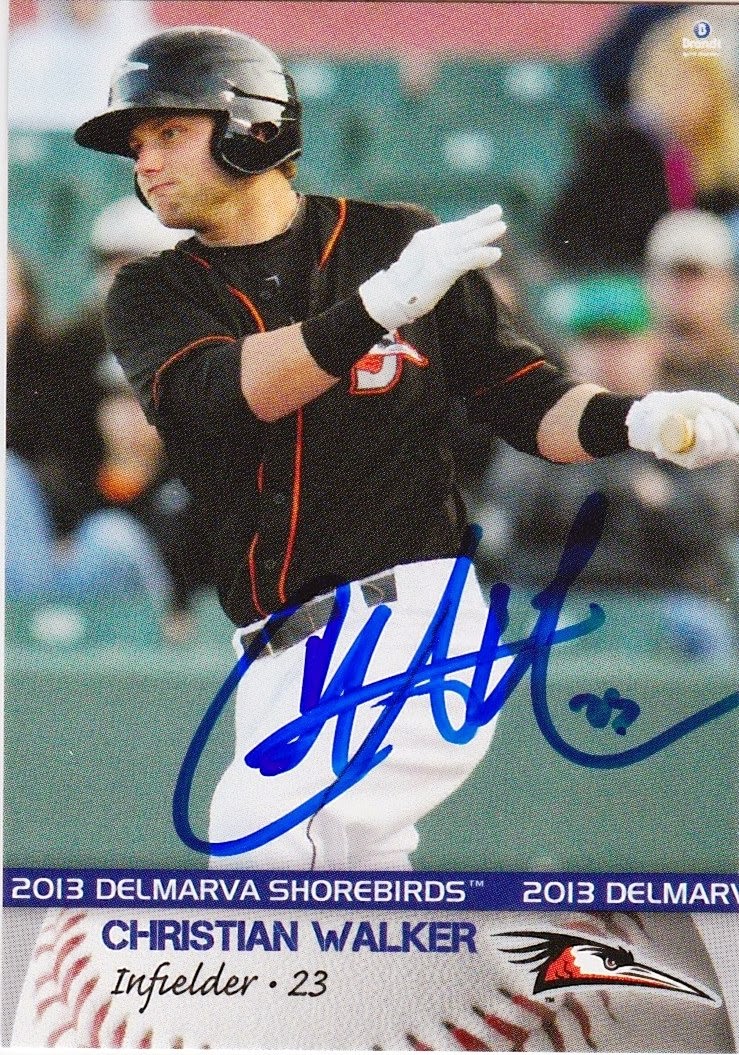 Christian had been working at the Orioles instructional league program in Sarasota for just this type of reason. Every year the O's send a group of 10-15ish minor league position players and pitchers to Sarasota to stay fresh in case any needs come up with the big league club after the minor league season ends at the beginning of September.

This Shorebirds signed card is the only autograph I have of his right now, but it works just fine for my collection, at least until I try to get one of my dad's custom O's cards signed. Christian has been included in a few minor league team sets over the years (2012 Ironbirds, 2013 Shorebirds, 2014 Baysox & Eastern League All-star set) and he seems to be a good signer. I saw him sign for multiple people at both Norfolk Tides games that I attended this year, but didn't have any unsigned cards of his at that point. Much to my dismay at this point. But one autograph is better than none!

Christian was drafted by the Orioles in the 4th round of the 2012 draft after a successful college career with the South Carolina Gamecocks. He made his professional debut with the short season A ball Ironbirds, and spent time at every ensuing level of the O's farm system. In 2013, he progressed from the lo A Shorebirds, to the hi A Keys, all the way to the AA Baysox in a single season. (Generally, jumping two levels in a single season is a good sign.) 2014 saw Christian start the year in Bowie before moving to AAA Norfolk mid-summer. He hit a combined 26 home-runs with 96 RBI this year, and yes, that was good enough to earn the call to Baltimore.

He made his major league and Orioles debut last night, September 17, and went 1-3 with a double in the game. He did enough to be the recipient of Adam Jones' post-game pie, and it was a very cool moment for the rookie. I have a feeling that we will be seeing more of Christian in the coming seasons in Baltimore. Good luck to him.
No comments:

Since I'm still waiting for my autographs to arrive for Orioles 983 & 984, I'm skipping to the 985th player to appear in a game today. That man is Quintin Berry. 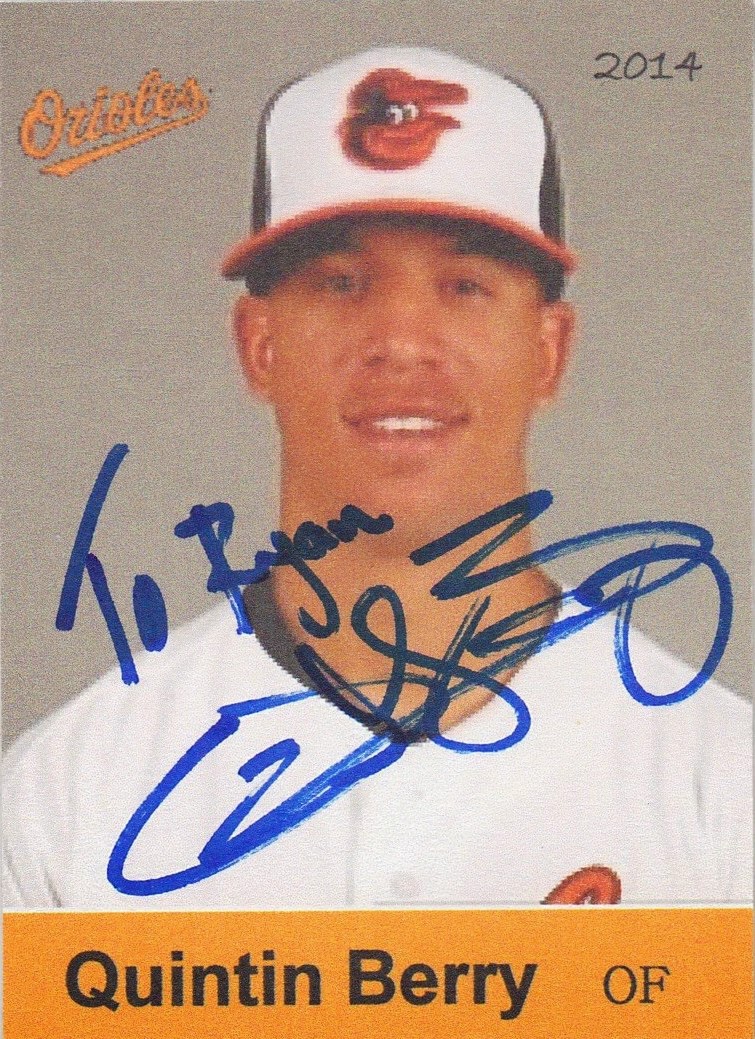 Unlike the two guys I'm skipping, Quintin was thankfully with the team in Spring Training, so I had an autograph of his prepared to slide right into my collection. Once again, my Old Man's Oriole Card is right there with Quintin's first, and likely only, O's card. He was actually a pretty great signer in Sarasota, so I actually have a few of his autographs for trade as well. 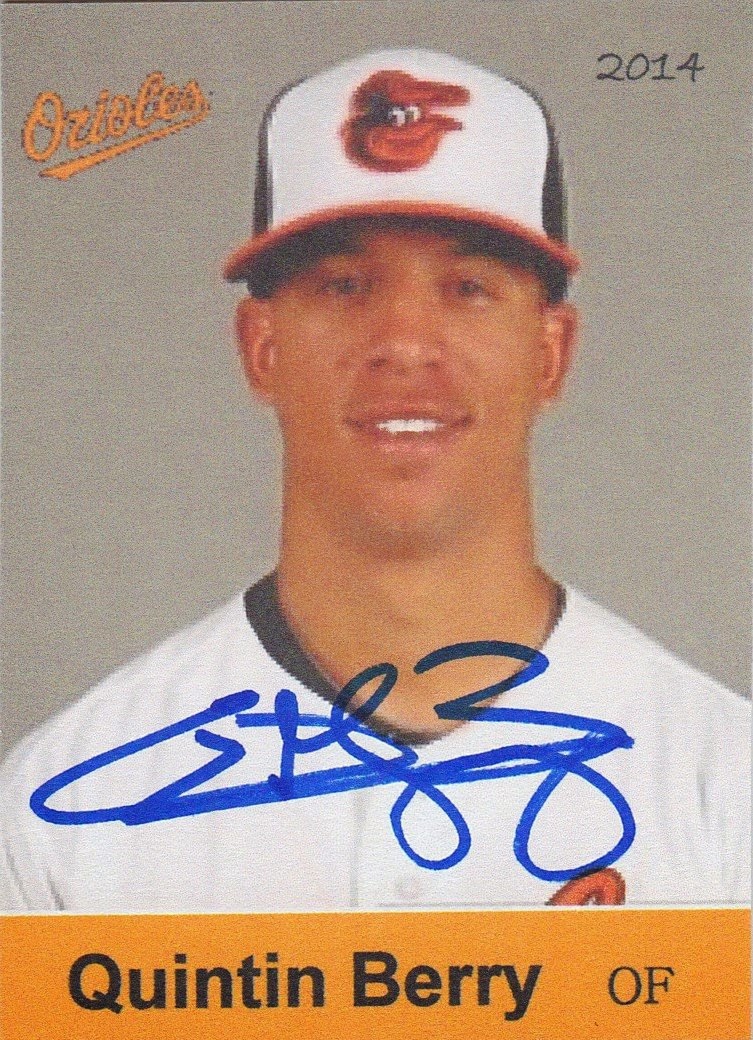 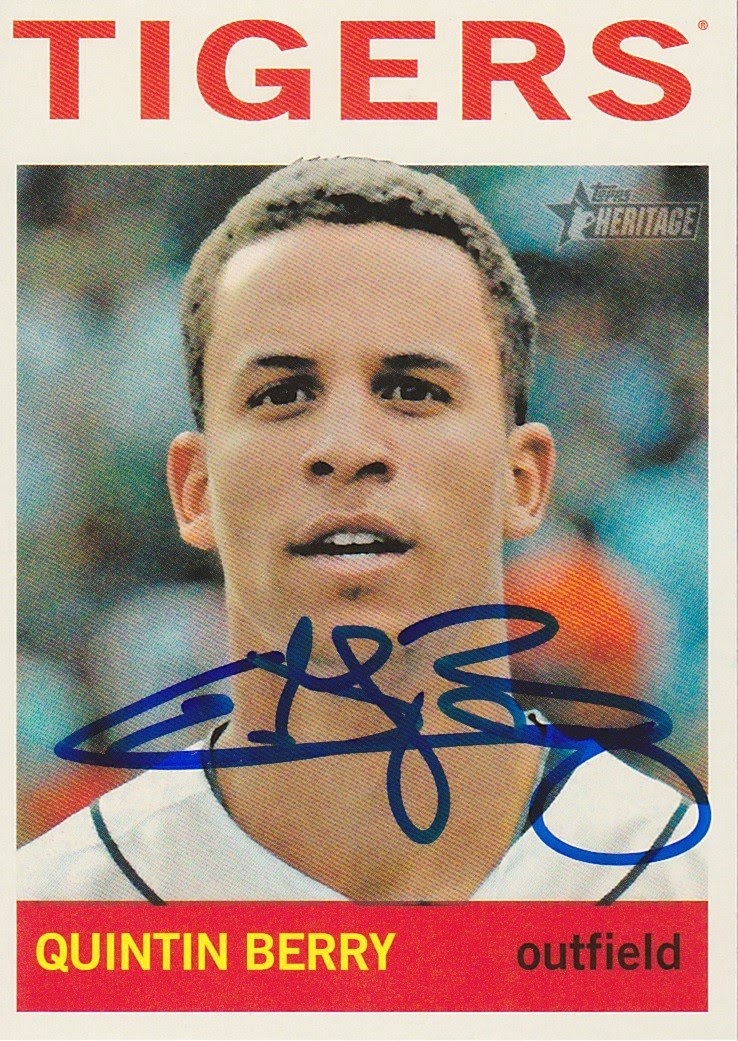 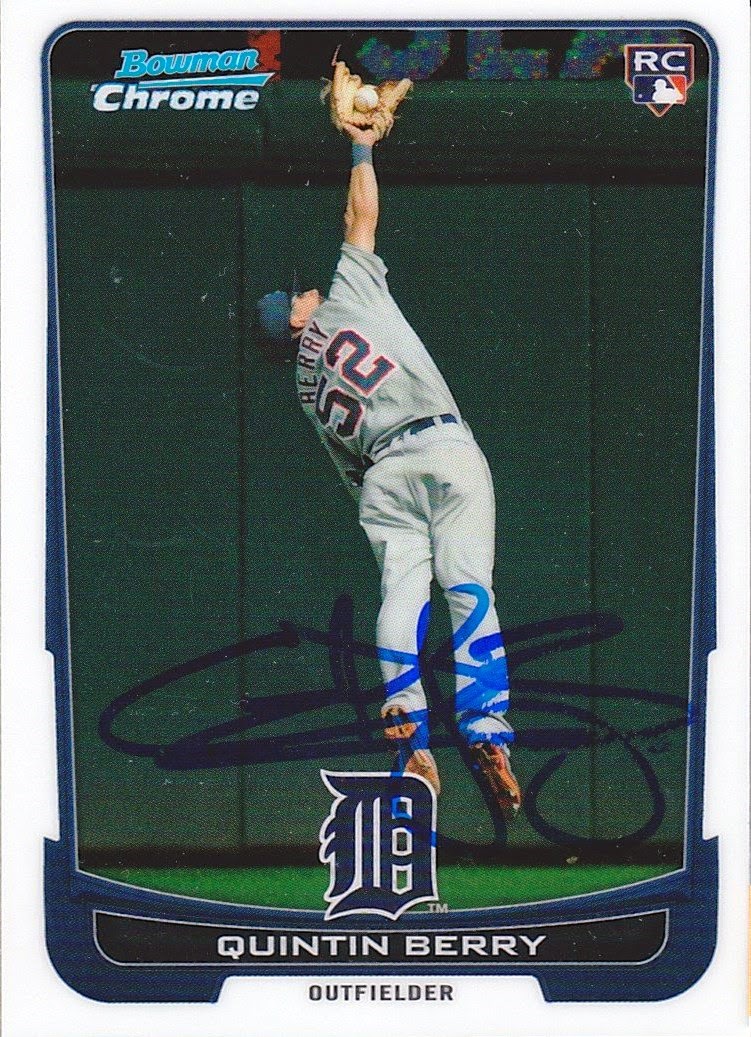 I showed off these autographs in a few posts back in March and April, and at the time, I mentioned that the Orioles might be able to use Quintin for his prowess on the basepaths, which is exactly what they have done so far. After a steal today, he is now 25-25 in stolen bases in his MLB career. Pretty impressive.

After playing for the Tigers and Red Sox in 2012 and '13 respectively, the O's signed him to a deal this past off-season. He had a good season at AAA Norfolk and definitely earned the promotion. He has appeared in five games for the Orioles so far, all as a defensive replacement or pinch runner, so that's pretty obviously his role with the team.

Oh, and he and Adam Jones are boys, as they attended Morse High School together in San Diego, and remain good friends. I imagine that factored in to his addition to the Oriole organization, but I'm all about it if he can help the team win a few games!
No comments:

There have been a handful of Orioles debuts, probably the last round for the 2014 season, this past week. I will cover them over the coming days, and hope to remain somewhat timely with my writing. But who ever really knows? I'm obviously pretty unpredictable. 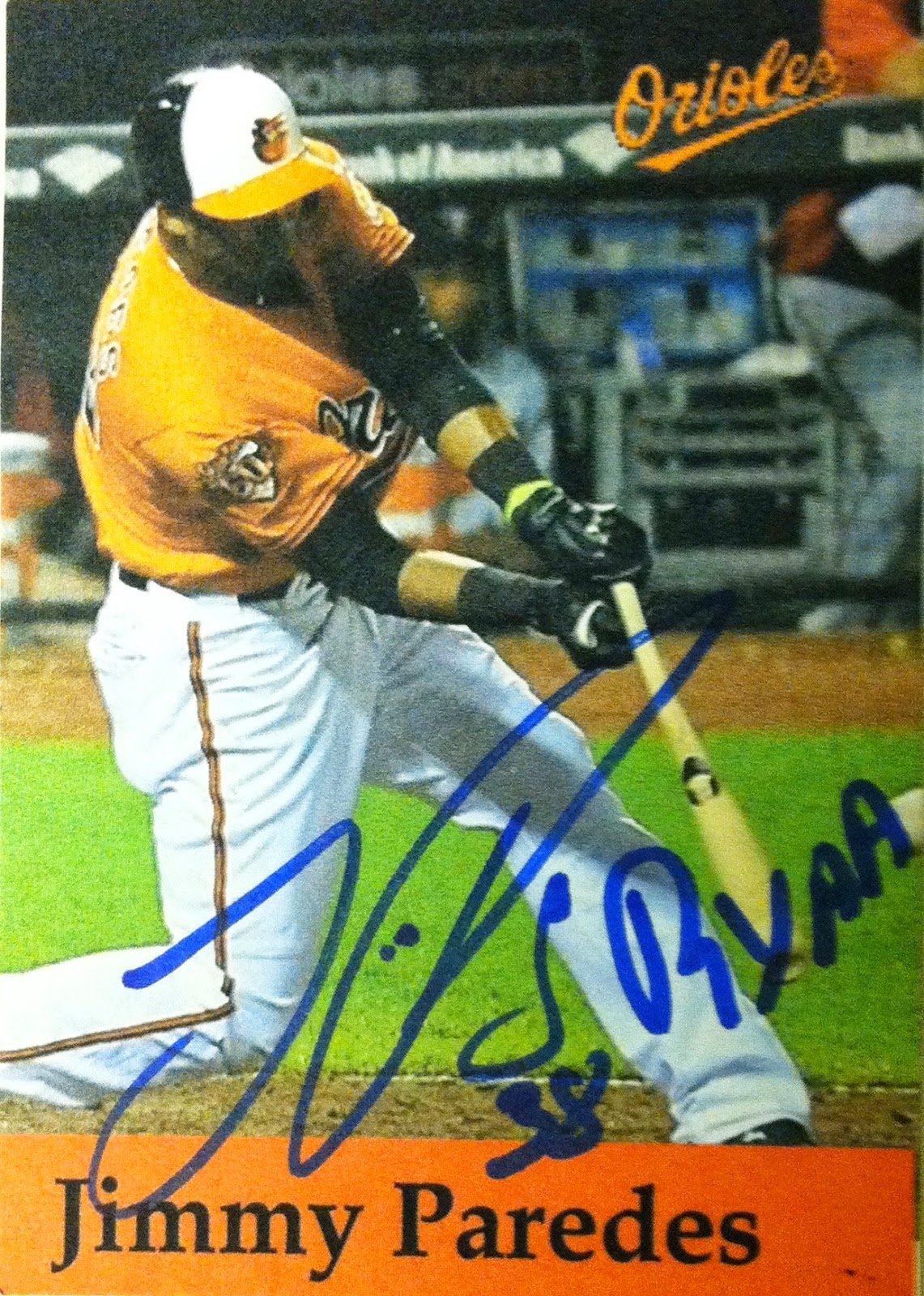 I haven't had the chance to do much autographing at all during this season and I only got a single autograph at Wednesday's Orioles game, but it thankfully filled a hole in my collection as Jimmy Paredes signed and personalized this freshly minted old man card. (I'm not sure but it might say Ryaa, but it's close enough for me and still much preferred to any form of Brian/Bryan.) My dad had just given me this card as we walked into the game around 6:30 and it was signed by 7 which was the quickest turnaround that I think I've ever done with one of his awesome cards!

Jimmy is actually in his second stint with the Orioles system in 2014, as he was a "member" of the organization for just two days back in mid-February. In fact, he rode the waiver carousel for much of the offseason, being selected by the Marlins from the Astros on November 4th, the O's got him from the Marlins on February 15th, then the Royals plucked him from the O's on February 17th, and the Orioles finally got their guy back from KC on July 24th. He spent most of the following month with the AAA Tides, before being recalled to Baltimore on August 28th and appearing in his first game the following day. He is the 982nd player to appear in a game for the O's and has appeared in five games, all at third base, since his debut.

There have been times where he has really flashed the leather but he also has already made two errors. He has been strong at the plate so far, hitting .333 with a HR and 4 RBI over 18 ABs. Over his career he has struck out way too often but has only whiffed once thus far for the O's.

Jimmy has been around the MLB block as he made his debut with the Astros back in 2011 and appeared in 118 games for the team between '11-13. He made it into 9 games for the Royals this season before the Orioles re-acquired him, so Baltimore is his third big league squad. And for the record, he has struck out in about 30% of his MLB ABs to date.

With Manny Machado's season ending injury, I would guess that Paredes might have a chance to make a postseason roster as a late inning defensive replacement, as long as he can clean up his fielding game over the next month. The O's obviously see something they like with him since they have brought him into the season twice this year so who knows what the future may hold.

Thanks for signing my card, Jimmy!