Whew, a lot of these late season additions to the Orioles roster have given me a run for my money in my attempts to add their autographs to my collection. Which has caused me to fall behind on my debut posts as well. But don't worry, I'm still here, just busy trying to catch up with all the new guys around town. 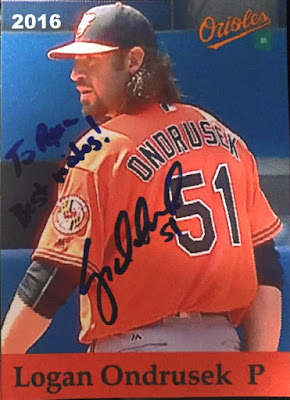 Logan Ondrusek's signing came completely out of left field, or I suppose more accurately, Japan, where he had been pitching for the past two seasons after spending parts of his first five seasons pitching for the Reds. In a very unexpected and Dan Duquetteish transaction, the Orioles signed him to a Major League deal on July 29th and designated Chaz Roe for assignment. This was right at the trade deadline as other teams were making bigger and better moves, so I think most of the Orioles fan base was beyond puzzled by this addition to the roster. 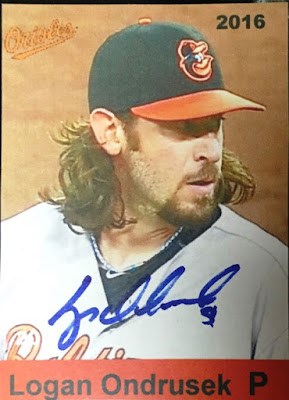 Logan made his Orioles debut the day after being added to the roster and proceeded to pitch in seven games for the Orioles over two stints with the team. Over 6.1 IP, he allowed 9 hits, 7 earned runs which worked out to a 9.95 ERA. Needless to say, things didn't go well. He was designated for assignment on August 26th and ultimately passed through waivers and ended the season at AA Bowie. 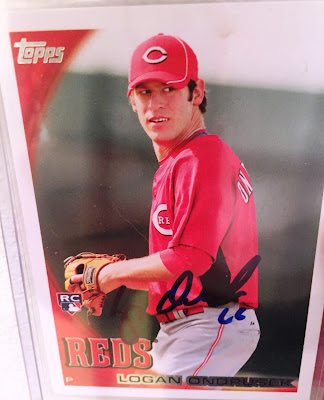 Shortly after Logan was added to the team, I was able to trade for this signed Reds card of his through a friend on SportsCollectors.Net. So it served as a nice placeholder in my collection. However, my dad quickly churned out some Old Man Cards of Ondrusek, and it was preference to save this post until I got them signed. And that's where my attempts to get these cards signed get interesting.

During his first stint with the Orioles, from July 30-August 11, the team only had three weekday home games which I was unable to attend. Luckily, he got optioned to the AA Bowie Baysox, which is the closest affiliate to me, so I planned to go to a game there on Friday August 19th, but something came up and I couldn't make it. So I decided to go the following Saturday, 8/29. But by that point, the Orioles had recalled him from Bowie and designated him for assignment, so he was in DFA limbo when I attended that game. The Baysox final home game of 2016 was Thursday 9/1 and the day before that it was announced that he had cleared waivers and would head back to Bowie. I went to the game with my family and we waited for Logan who was one of the last players out of the clubhouse with only about five minutes to go before first pitch. Luckily, he was a nice guy and came over to sign for us as you can tell by the cards in this post. And that's my drawn out story about how Logan's signed and personalized Old Man Cards came to my collection. I hope you enjoyed it!
No comments: